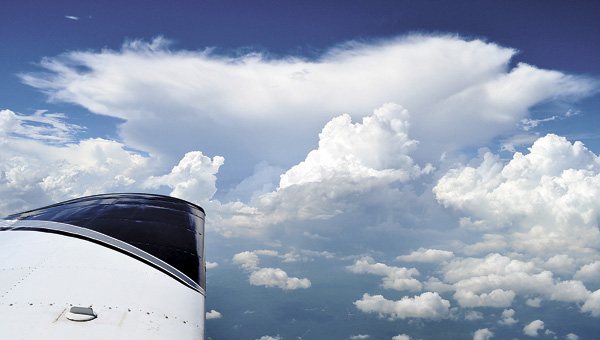 Up in the air: Zach Laser, of Suffolk, and Ryan Taylor — both seniors at Embry-Riddle Aeronautical University and aspiring Air Force pilots — captured this photograph of a thunderstorm from the air on their way back to Virginia. They finished their three-week flight, "America from 5,000 Feet," on Aug. 14. Visit www.sunlitsilence.com for more photos of their trip.

After 61 flying hours, 22 days, 24 airports and 6,064 nautical miles in a plane that measures just 23.3 feet from front to back, pilots Zach Laser and Ryan Taylor came barreling down the runway at Chesapeake Regional Airport Saturday.

The two seniors at Embry-Riddle Aeronautical University, both members of the Air Force ROTC, are home safe after completing their three-week “America from 5,000 Feet” flight around the United States.

“Henry Miller had it right when he said, ‘One’s destination is never a place, but a new way of seeing things,’” Laser said. “It certainly changed my perspective on life. We spoke to people who had never been east of the Mississippi and saw entirely different lifestyles than we’d ever seen.”

The trip that began as “a far fetched idea” and had a year of detailed planning behind it took the pilots much closer than 5,000 feet.

“It was an eye opening trip,” Laser said. “Having grown up on the East Coast, we saw things we never would have imaged we would. It really hit me when I saw the Pacific Ocean for the first time. We were landing in Shelter Cover, Calif. and the sun was right over the water. It just hit how much of the world there is to see.”

Some high points of their trip included camping in “no where” Wyoming, eating fresh caught salmon in McCall, Idaho, staying in the Hilton in Los Angeles on a detour and eating alligator and Creole jambalaya in Louisiana.

But for as many new places the two pilots saw, they encountered as many challenges.

They flew through the Rocky Mountains at 11,000 feet, had two detours, lost their GPS signal and had to fly by landmarks, landed on a runway that was hand mowed in a Wyoming field, flew from Phoenix to Austin on Red Bull and coffee in the middle of the night and through a thunderstorm in New Orleans.

One of the biggest challenges was flying through the Rocky Mountains.

“We’ve been flying in Daytona, Fla.,” Laser said. “Mountains like those aren’t something we’d had to deal with before. Some of the peaks were literally as high as we could go, and we had to find routes through the mountains. At times, we lost connect with air traffic control, and they didn’t have us on radar. We just had to trust our aviation charts and our abilities.”

The two pilots were able to overcome each obstacle put in front them and gave them new insights on flying, and life.

“It’s given us a wide range of experience,” Laser said. “You can spend thousands of hours flying, but if it’s only in thunderstorms, it doesn’t make you any more prepared for the mountains. As aspiring Air Force pilots, we now have tools that you can’t learn in a classroom. They come through experience.”

A mere five days after landing, Laser began his return trip to Florida, where he will finish his last year of school.

Laser and Taylor have already been asked to give presentations, possibly put together a cross-country flying class and are planning to print their journal as a book.

“There are a lot of limiting factors in life, but I’ve learned to push the boundaries,” Laser said. “There is so much out there to see and experience. I want to shape my life around experiencing things. Hopefully, through our photos and journal entries, other people will be inspired to do something similar.”

“The one thing I did realize while in Florida with my friends on my way back up to Chesapeake was that you can see all these incredible things, but there’s really no place like home,” Laser said. “That’s how I felt when I got back.”

Visit www.sunlitsilence.com to read their blog entries and view pictures they took from across America.

Community must act, not talk