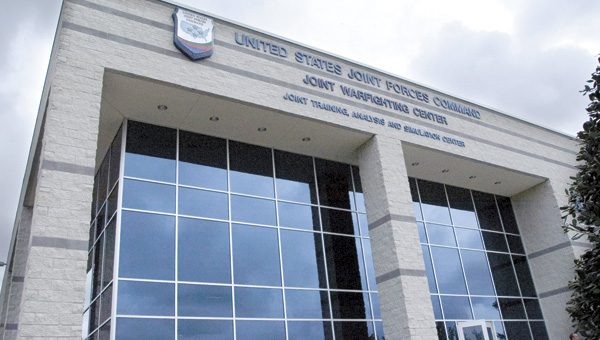 Joint Warfighting: According to a secret memo, the Joint Warfighting Center at U.S. Joint Forces Command, seen above, could be moved elsewhere. The Joint Experimentation Center has been recommended for closure.

The memo gave no indication where the information came from, other than to say, “Earlier engagement on this matter could compromise a source.”

The memo added that Christine Fox of the Secretary of Defense’s Capability Assessment and Program Evaluation team had conducted a five-month internal study on eliminating JFCOM. That study began at the end of last year. The Defense Business Board was used as a cover to announce the recommendation, the memo states.

The recommendation was said to have the backing of U.S. Marine Corps Gen. James Mattis, commander of JFCOM from 2007-2010; U.S. Army Gen. Raymond T. Odierno, current commander of United States forces in Iraq and the man who has been tapped as the next leader of JFCOM; and Gen. James E. Cartwright, vice chairman of the Joint Chiefs of Staff.

The memo says the CAPE analysis recommends eliminating the joint experimentation function of the command, and diverting the joint warfighting center elsewhere.

“The analysis gives the Force Provider mission back to the individual services and would outright eliminate J-9 the Experimentation function,” the memo said. “Gen. Mattis never believed they provided anything of value. They see value in the J-7 Joint Warfighting Center, but want to divest the leased space so it could potentially go anywhere.”

Congressman Randy Forbes (R-04) blasted the secrecy surrounding the process, while acknowledging he was trying to confirm the memo’s accuracy.

“We are attempting to verify the facts surrounding this memo,” Forbes said in a statement emailed by his communications director. “However, if the memo proves to be accurate, then the lack of transparency and secretive nature in which this Administration seeks to conduct our nation’s business is even more frightening than we thought.”

“We’ve still got a huge engine here,” she said. “Modeling and simulation’s not going away.”

Johnson said she signed off on a letter to the White House Thursday. The City Council passed a resolution Wednesday urging Obama to reject the recommendation.

“Senator Webb has been deeply troubled by the lack of consultation with Congress, the inadequacy of analysis supporting the Secretary’s recommendation to eliminate JFCOM, and the opaque process that [the Department of Defense] has employed while the Senate has been in recess,” the senator’s staff said in an emailed statement. “He has also questioned the department’s legal authority for the command’s closure.”

“The intention is to have the President sign the Recommendation Package by September 1 so it is done before Congress returns,” the memo stated. “There is supposedly some concern in the White House about ‘losing Virginia’ …. So we need to have calls to the President’s Chief of Staff Rahm Emanuel and other key staff beginning at noon on Friday!”

The first job losses would occur after the new year begins, the memo concluded. It also gave an indication that the U.S. Second Fleet, based in Norfolk, could be nixed.

“Even more disturbing is that OSD is considering a move to mothball the Second Fleet,” the memo stated in all capital letters.