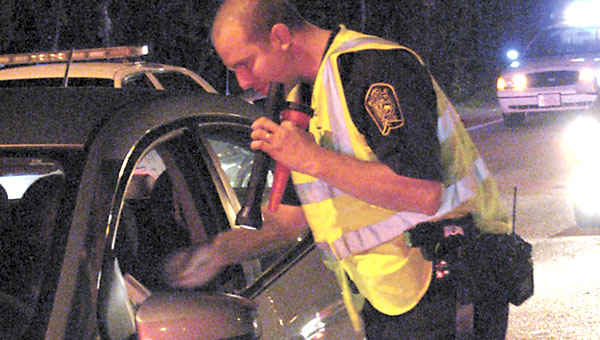 Information please: A Suffolk Police officer checks the identification and insurance information of a driver during a random checkpoint held last week along College Drive.

More than 20 police officers — many of whom volunteered for the late-night assignment — are on the scene, helping to direct traffic, check vehicles and supervise the operation.

Police officers stationed along the line of cars ask for drivers’ licenses and registrations and do a visual check for any problems. They’re primarily looking for drivers who are under the influence of alcohol, but they also keep a sharp eye out for drugs and weapons law violations, fugitives and other problems.

Down the road, officers sit in their cars with some cones and signs reading “Police Checkpoint” nearby. The decoy helps funnel cars trying to avoid it to the real one.

One driver is so desperate to avoid the checkpoint that he does an illegal U-turn and starts driving down the same side of the road, into incoming traffic. He’s immediately pulled over by police.

It’s a Saturday night, and Suffolk police have set up a random DUI checkpoint. And they’ve already arrested some objectionable behavior.

“The most important thing is visibility,” said Lt. T. Shelton, who was in charge of the operation. “If we let people know we are looking for drunk drivers, that makes them think twice before drinking and getting behind the wheel.”

A total of 1,028 cars pass through the checkpoint between roughly 10 p.m. and 4 a.m. Almost 90 are pulled off to the side for further investigation. Police make five arrests and issue more than 50 summonses for everything from driving without a license to violating a learner’s permit to failing to secure a child in a proper restraint.

Police decide where to set up the checkpoints based on incident history in the area. They take the area’s terrain into account, as well, for safety purposes — there has to be enough room for plenty of traffic and pedestrians to maneuver safely.

On this night on College Drive, three lanes on each side of the road provide plenty of room. On the outside lane in each direction, the officers’ cars are parked, lights blazing. The line of traffic moves through the center lane, where several officers at a time check the front few cars in the line. If there are any problems or delays, the car is pulled over for further investigation.

“If everything checks in order, we’ll send them back on their way,” Shelton said.

At this checkpoint, two of the five arrests are for driving under the influence. Police conduct field sobriety tests on drivers whom they suspect of drinking and driving.

Also, two fugitives and one person in possession of illegal drugs are taken into custody at the scene.

“When people see this, we hope, people will think twice before drinking and getting behind the wheel,” Shelton said, adding he believes the checkpoints make a difference.

The police department couldn’t do the checkpoints, he continued, without the officers who volunteer for the assignment. Auxiliary police officers — Aux. Sgt. Thompson, Aux. Officer Thomas, Aux. Officer Deehan and Traffic Assistance Officer Suggs — even signed up to participate for no pay.

“They’ve sacrificed a Saturday night with their families to come out there and make a difference,” Shelton said. “They don’t get paid at all, and they’re out here on their own time for no pay, no compensation, no nothing.”