Pow Wow drums up another success 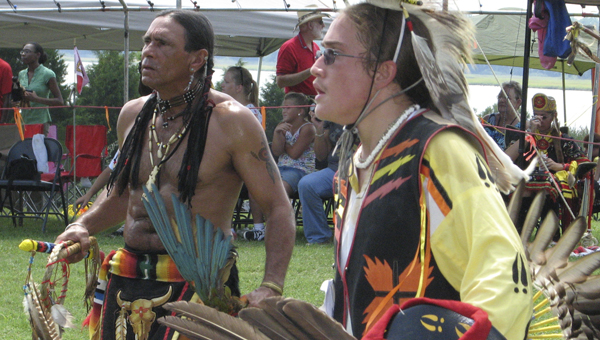 For hundreds of visitors, a sliver of land along the Nansemond River became the place where they could look back at history. For those participating in the event this weekend, it was more than a look at history. It was a chance to honor their heritage and connect with their ancestry.

“I really do feel my ancestors during these days, when we are here next to the river,” tribal Chief Barry “Big Buck” Bass said, sitting next to his wife Betty. “This is something very special, and we have a great time every year.”

Intermixed with the dancing, ornate clothing and handmade crafts, the powwow serves as a gathering of tribes, which bring with them their rituals and traditions. But don’t believe for a moment this event just happens overnight.

“The minute we wrap up this event, we start working on next year’s,” Betty Bass said. “In many ways, we already have next year’s event lined up when our guests pack up, leave and say ‘see you next year.’”

Chief Bass, while pleased with turnout of both the vendors and guests, did admit some vendors have left the circuit due to the sluggish economy.

“We’re a little down from last year, because some people have stopped going to events like this one,” Chief Bass said. “But you wouldn’t know it by how many are here and the number of visitors present.”

For 3-year-old Dakota Allen, from Suffolk, she may remember her first powwow because of a moment she shared with a 3-year-old red tail hawk, Wakon.

Wakon’s handlers were giving those interested a chance to pet the hawk, an opportunity the tentative Dakota took advantage of.

“Isn’t she beautiful?” Allen’s family said as the young girl petted the bird. “She’s as old as you are.” That petting session ended very abruptly as Wakon stretched out her wings quickly, sending Dakota back into the arms of her aunt.

“That’s the kind of things that we really aim to have every year,” Chief Bass said. “We want to make sure we show off our heritage and make sure our guests want to come back next year.”

For Hampton resident Beth Chapman, the attraction was much simpler.

“This is awesome. I love the dancing and the drums,” Chapman said as she sat in a chair holding an umbrella blocking the sun. “I come every year. And I’ll be back next year.”