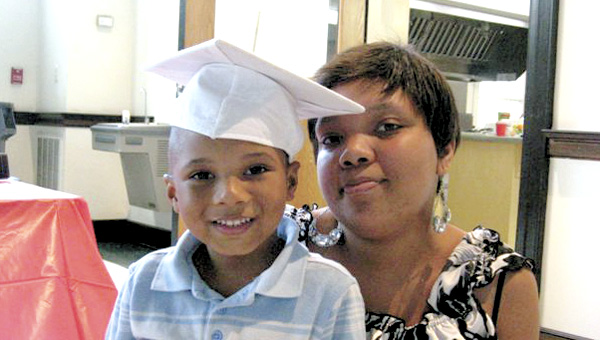 Johneeta Riddick, had her son, Keishun, when she was just 15 years old.

Without a mother herself, Johneeta was tasked with the challenge of not only raising a son, but also doing so without the guidance of a parent or any background in childcare.

Five years later, Keishun is a rising kindergartener at Hillpoint Elementary, and he and his mom just graduated from Healthy Families’ parenting education program, which Riddick has been involved in since Keishun’s birth.

“I was in a bad situation when I had [my baby],” Riddick said. “It was hard raising a child, but I knew I wanted to do it. Everything I was going through was hard, but they helped me out through thick and thin. [Ann Smith] was like a mother to me. She was there when I had to go to the doctor, she’d bring him books so I could read to him. Miss Anne helped me be a better mother.”

Healthy Families’ parenting program is a collaboration between Sentara Obici Hospital and the Suffolk Health Department with funding from Obici Health Care Foundation, Suffolk and Isle of Wight social services departments and the city of Suffolk.

With the help of the program, Riddick has laid the foundation for a healthier life for her and her son.

“When I first met Johneeta, she had never been around babies,” Smith said. “When I saw her graduate, it was very emotional for me because she overcame so many obstacles. She went from being a young teen mom to an intelligent young woman, focused on making sure her son is her first priority in life.”

Through its two family support workers, one of which is “Miss Ann” Smith, it offers voluntary and free assistance to first-time mothers in need of parental guidance.

“We do developmental screenings, help them get scholarship money, work with them on setting goals like when their child should be potty trained, act as a mentor, make sure they have a doctor — we do what we need to make them capable parents,” program manager Marli Laudun said.

While the program offers basic parenting advice, helps parents set realistic goals for their children and helps them set up doctors’ appointments, the reality of the program can have far-reaching impacts for these first-time parents.

Riddick had to take Keishun to the hospital for what they later discovered was lead poisoning. As a result, he began to have developmental issues, but the program was able to provide medical recommendations for Riddick, who was able to get Keishun the help he needed.

“He had to go to the [Children’s Hospital for the King’s Daughters] for six weeks,” Riddick said. “He wasn’t developing like he should have. Now, sometimes he just mumbles his words a bit, but he’s starting kindergarten on time and you can hardly tell he was having a problem. I don’t know where I’d be without them.”

Riddick and Keishun are just one of the 355 families the program helped.

“I’m proud that they helped me and my son,” Riddick said. “I love them for that. I’m happy to have been part of the program. Without it, I can imagine many parents would be scrambling.”