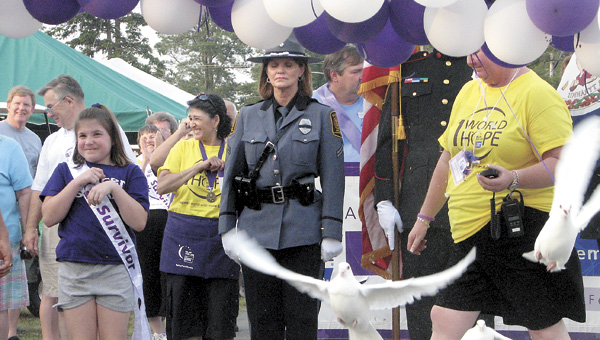 Relay for Life: A dove flies into the air at the beginning of Suffolk’s Relay for Life. The Relay has nearly met its fundraising goal for this year, and already surpassed last year’s total.

The Suffolk Rockin’ Relay for Life has had some major obstacles to overcome this year.

Now, with less than a week before the end of its fiscal year, their financial goal is so close they can almost taste it.

While $13,000 might seem like a large gap to fill before Aug. 31, if a $16,000 matching donation from Unilever Lipton arrives before the Aug. 31 deadline, the Relay will make its net goal for the year.

“It’s going to be difficult to meet goal, but we’re trying as hard as we can,” the Relay’s American Cancer Society community manager Anne Barclay said.

The $16,000 is a matching donation from corporate offices for the money raised by the team from the Lipton Suffolk branch that participated in Suffolk’s Relay.

While the media representative at Unilever Lipton said it would take a few days to receive a concrete answer from the proper department, Barclay said she is doubtful Lipton’s donation will come before the Aug. 31 cutoff.

“Last year, the matching donation didn’t come until September, I believe,” Barclay said. “They’re on a different fiscal calendar than we are.”

Whether the Relay ultimately meets the goal this month, leaders call the year a success.

“This year there have been so many obstacles with the economy being the way it is,” past chairman and committee member Jeanne Banks said in previous interview. “It seems we had a good start, and we’d think, ‘We can’t keep going like this. There’s too many things against us.’ But we kept going anyways, and we’re almost there. ”

The Relay grew in terms of volunteers, walkers, survivors and teams this year, and has already surpassed last year’s earnings.

“We’ve had a great year,” Barclay said. “We increased what we brought in last year, had more teams, participants and survivors. That’s growth, and growth is good.”