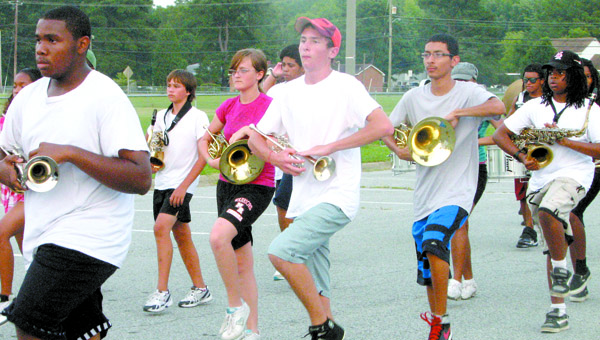 Nansemond River High School band members practice their routine during band camp this summer. The group has been invited to the Philadelphia Thanksgiving Day Parade.

The band was invited to march in the 2010 Philadelphia Thanksgiving Day Parade and has been raising funds all summer for the trip.

“This is the largest group we’ve ever had, and it’s because we’re working toward a goal,” band director Edward Woodis said. “As a band and a school, we decided to aim at going to the Macy’s Thanksgiving Day Parade. This is a steppingstone to that long-term goal.”

Including a $10,000 contribution approved by the Suffolk School Board this week, the students have collected $16,000. Car washes and a summer-school concession stand have provided the extra above the School Board’s contribution.

Band members will continue the effort through the school year by holding fundraisers, such as their fruit fundraiser in September and the annual Band Day in October.

While there is still a lot of work to be done and money to be raised, Woodis is confident his students have what it takes.

Evidence of their ambition is the sheer numbers and attendance record his band has had.

The band began the 2009-10 school year with 72 students, but 134 members participated in the Grand Illumination parade in Norfolk last Christmas.

This year alone, there are more than 30 new band members, due to the recruitment effort put in by band members and attendance at a summer boot camp has been above 95 percent of the 100-plus members.

“They have shown us that they are serious about this,” Woodis said. “Excellence is the standard, not the goal. That is our motto. They don’t just do it. They maintain it.”