Half a million miles 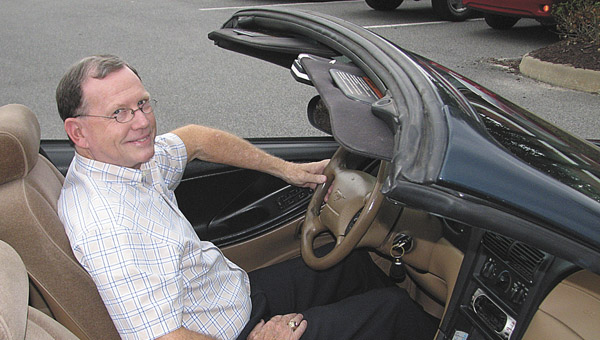 Twenty trips around the earth’s equator. One journey to the moon and back. Or almost 260 round trips between Suffolk and Marco Island, Fla.

That’s how far John Woleben could have driven in his 1994 Ford Mustang V-6 convertible. The ragtop’s odometer clicked over to 500,000 miles near the Suffolk weigh station on westbound U.S. Route 58 on Friday.

“I was watching it,” he said. “The five started coming up first and then all the zeros followed along.”

Woleben, an employee benefits producer for a business insurance agency and perennial Toys for Tots Suffolk-area coordinator, bought the car brand-new from Gwaltney Motor Co. in Smithfield in late 1993. He drove it for a while, then gave it to his son as a gift for his graduation from medical school at the Medical College of Virginia.

After about 100,000 miles, his son wanted to buy a Jeep — using the excuse that he needed four-wheel drive to get to the Richmond hospital “in the snow” — and the dark-green Mustang came back to Woleben.

For 16 years, the car has been Woleben’s constant companion everywhere — back and forth to work, volunteering and even on numerous journeys to Marco Island in the Florida Keys, where his in-laws used to live.

“I love the car and the body style, and I have a ragtop,” he said. “It’s comfortable. It’s the right size for me.”

Woleben says the key to making a car last a long time is to “change the oil every 3,000 miles.” That means his Mustang has had 166 oil changes in its lifetime.

There have been bumps and bruises along the way. A couple of careless drivers have dented the driver’s side door and rear-ended the car. Head gasket recalls from Ford have initiated visits to the dealership. Roughly 23,812 gallons of gas have come and gone, judging by the government website fueleconomy.gov.

But there have been good times, too. The top often comes down at the beach, where Woleben and his family enjoy spending time. They visit the Outer Banks often, as well as plenty of other beaches up and down the East Coast.

Most importantly for needy children around the area, the car has been packed to the brim with thousands of toys throughout the years.

“I’ve filled this thing up more times than you can count with Toys for Tots,” he said. “One time I had one of those bears sitting in the passenger seat. It looked like a person. I probably could have driven in the HOV lane.”

Woleben says he doesn’t plan to get another car anytime soon. He may even buy a new engine when it needs one, rather than getting a brand-new car.