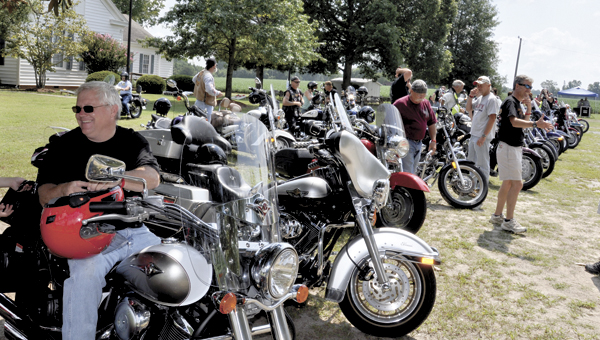 Riding for shoeboxes: More than 60 motorcyclists and riders came out last week for a charity ride to benefit the Somerton Friends Meeting’s Operation Christmas Child efforts. The program, run by the Samaritan’s Purse charity, sends donated, gift-filled shoeboxes to children living in poverty.

About 40 children in various countries around the world will be blessed this Christmas by the acts of a group of motorcycle riders in Suffolk in August.

Fifty motorcyclists and 11 riders helped raise more than $1,200 last week for Operation Christmas Child, a ministry run by the Samaritan’s Purse organization that ships gift-filled shoeboxes to children living in poverty around the world. Organizers expect the money to buy enough gifts to fill about 40 shoeboxes.

The motorcycle ride was organized by the Somerton Friends Meeting, which has been preparing Operation Christmas Child boxes for about eight years.

“I asked the women to take that on as a project,” said Raiford Baker, head trustee of the church’s board of trustees. “They did a few boxes. The next year, it grew a little bit. Every year, it grew more and more.”

However, with the economy struggling the last couple of years, the women of the church were using their own money to maintain the same number of boxes.

“I saw them spending their very own money to fill these shoeboxes,” Baker said.

That’s when the motorcycle-lover got an idea — put on a charity motorcycle ride to help fill the boxes.

The 61 participants were treated to breakfast and lunch, music by the Southside Baptist Church praise band and door prizes. Best of all, they have the blessing of knowing their money will buy toys, school supplies and toiletries for children in dozens of countries around the world. Since Operation Christmas Child started in 1993, more than 69 million shoebox gifts have been delivered to children in more than 130 countries.

“I’m well-pleased with the ride,” Baker said. “We had a tremendous day. I have intentions of doing it year after year.”

Around the world in 11 months

Bringing people back to church