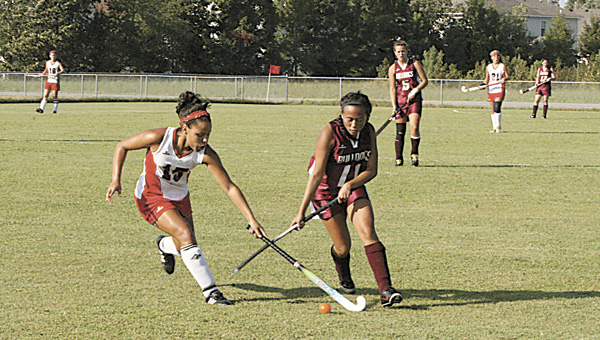 Nansemond River’s Jessica Adams scored four goals to lead the Lady Warriors to a 7-1 win over King’s Fork in the first intra-city field hockey match of the season Wednesday at Nansemond River.

It took a little bit for the Lady Warriors (3-0, 3-0) to break down a tough defensive effort by the Lady Bulldogs (1-3, 0-3), but by the end of the 60 minutes, it was Nansemond River’s third straight easy victory against a Southeastern District opponent to start its schedule.

Nansemond River controlled most of the play in the Lady Bulldog half of the field in the opening stages. In the 15th minute, the Lady Warriors capitalized on their second penalty corner of the day. NR went on to score three times off of corners.

Perri Holloman put the ball in play to Mary Gover, who sent a hard drive on goal from the left wing. Adams deflected the shot up and into the KF cage.

Seven minutes later, the Lady Warriors finished another corner with the ball in the goal. Jordan Morris’s shot created a rebound and Markelle Patterson swept the ball in from near the right post.

With just over a minute left in the half, Adams finished a play with good ball movement by Shelbi Holloman and Erica Dover. Dover passed across the goal, setting up an open shot that Adams put away.

King’s Fork created its goal straight from the whistle to start the second half. The Lady Bulldogs pushed forward and took the play into the NR arc for one of the only times of the match. Holly Wilson scored with a hard blast from near the penalty spot 52 seconds into the half.

The Lady Bulldog goal energized both sides and the tempo of play picked up, which turned out to be good mainly for Nansemond River.

It took less than four minutes for NR to answer. Shelbi Holloman sent a hard shot on goal. KF keeper Kristin Moore got a pad to the shot, but it still trickled over the line to make it 4-1 NR.

Moore finished with 19 saves for the Lady Bulldogs. King’s Fork plays at Churchland on Tuesday afternoon. A 2-0 win over Churchland was KF’s first win of the season back on Aug. 31.

Nansemond River hosts Lafayette on Friday and hosts Heritage on Tuesday before a big district match against Western Branch.