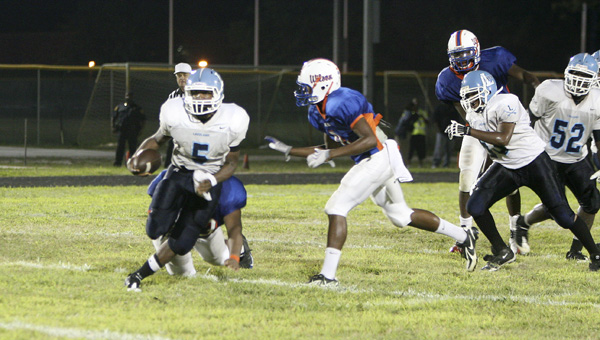 Lakeland quarterback Walter Boykins scrambles during last Thursday’s game at Wilson. The Cavaliers fell to the Presidents to start the season, but they get to host city rival Nansemond River for game two, Friday at 7 p.m.

Lakeland won for the third straight year against the Warriors last season, rolling to a 30-0 halftime lead and a 43-15 victory. Walter Boykins put up 220 passing yards and two touchdowns through the air for the Cavs. Lakeland’s scored 41 points per game in the three wins.

Nansemond River suffered a 37-0 loss last Thursday to Grassfield. If any team is going to dethrone Oscar Smith within the Southeastern District, chances are it’s going to be the Grizzlies.

Lakeland fell at Wilson. The Presidents were in their first game under a new coach and coming off a 2-8 record last season.

The Cavaliers rallied from a 19-0 deficit in the second quarter, getting to within 19-16 and with the ball in Wilson territory late in the third quarter, but too many fumbles and penalties finally cost the Cavs.

The Hawks edged KF 20-14 in overtime last season. Hickory needed a 90-yard pass play with three minutes left in the fourth quarter to tie the game.

Last Friday, Hickory opened its season with a definite statement, beating Norview 56-21. Hickory’s using a new triple-option offense. Quarterback George Godfrey, while a dangerous runner, was 9-for-9 passing for 272 yards and three touchdowns against Norview.

A lone bright spot in KF’s 49-14 loss to Churchland last week was 161 rushing yards for the Bulldogs. Sophomore wingback Chuck Clark rushed for both KF touchdowns.

The Saints went down to the last snap last Friday before falling 20-15 to Windsor.

NSA’s defense forced the Dukes into 13 negative-yardage plays and two fumbles lost, but the Saints also allowed a couple big plays. On offense, Domonique Lennon was 9-for-17 passing with no interceptions, so the Saints had some success mixing more of a passing attack in their offense, something head coach Kevin Allen worked on through the offseason.

The Seahorses started their season with a 31-2 win at Virginia Episcopal last Saturday. NSA and Christchurch are mates in Virginia Independent Schools, Div. II, giving this game added meaning for playoff possibilities, even though it comes in early September.