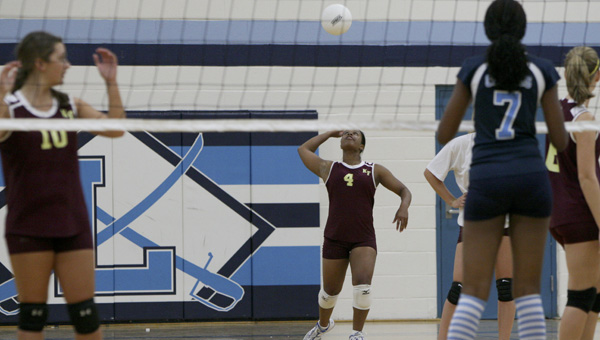 “Actually, we started out doing everything well tonight, especially with our hitting,” Whitfield said. “We were much more in sync tonight than we have been in any match so far.”

It was the second victory in three matches and first Southeastern District win of the season for the Lady Bulldogs (2-3, 1-3).

King’s Fork had to move quickly onto another district contest, Thursday evening at Indian River.

“We’re at Indian River tomorrow (Thursday) so I hope we take this momentum and level of play and carry it over because they’re going to be more aggressive. They’ll play more over the net, play better defense and have better serving,” Whitfield said.

Against the Lady Cavaliers, the start of the fourth set was the critical stretch of the match for KF.

After Lakeland (0-4, 0-4) won the third set, Jamika Townsend served the Lady Bulldogs out to a 7-0 lead. Later in the set, after Lakeland had closed to within two points on a couple occasions, KF won four straight points on Townsend’s serving to go out to a 21-14 lead that proved safe.

Whitney Nichols led the Lady Bulldog hitters with seven kills to go with eight digs and three blocks. Nichols, KF’s starting point guard during basketball season, is a half-foot or more shorter than most volleyball squads’ top players at the net. Her leaping ability and timing make her dangerous, even as a blocker.

Bess, with top-spinning jump serve, put in six aces in a 9-0 run early in the third set.

“Definitely, all of our serves were on tonight. We had been struggling with our serves, but tonight we upgraded that and it helped us,” Bess said.

KF’s Zach Johnson made some athletic plays at the net and finished with four blocks, but Lakeland was too consistent. The Cavaliers (2-2, 2-2) pulled away early in sets two and three. Mike Estienne totaled 11 assists and four aces for the Cavs.

Rotten in the Pentagon