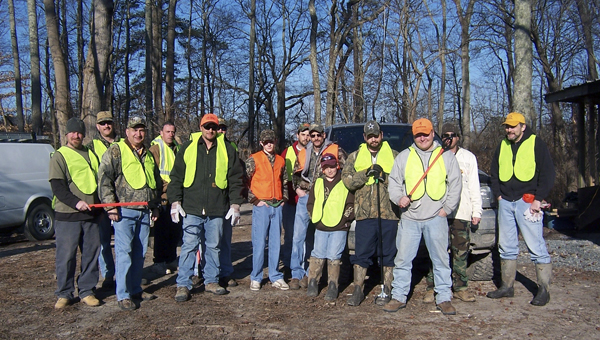 Cleaning up: Members of the Shoulder’s Hill Hunt Club pose for a photo after cleaning Shoulder’s Hill and Sleepy Hole roads. Groups that adopt roads receive free cleaning and safety supplies in exchange for cleaning the road at least twice a year.

The city is encouraging citizen groups to help combat the litter in their neighborhoods by adopting a stretch of highway and pledging to keep it clean.

The city’s Litter Control Office offers Adopt-A-Street and Adopt-A-Spot programs for groups, clubs and families to get involved in the cleanliness of their city. Carol Warren, who has been involved in two different groups that participate in the program, said she would recommend it to any organization.

“I’d recommend it for even high school groups to adopt a highway,” Warren said.

“It’s a wonderful thing,” Warren said. “It gives [the youth] the respect to know about trash thrown onto the streets.”

Those who adopt streets or spots are required to clean their adopted areas at least twice a year, but four times a year is preferred. Participants receive signs of recognition at the spot or on each end of the street, signifying their commitment to keeping that area clean.

Some groups go above and beyond just their street, though, Warren said.

“Sometimes we incorporate it to the other roads,” she said. “We go completely around in a circle. It really makes a difference when we’re out there helping our city.”

Warren said her groups have gleaned as much as 14 full-size orange trash bags from the roads surrounding the village of Holland.

“We’ve even gotten tires,” she said.

Program participants don’t have to spend their organization’s own money to help. The city provides trash bags, gloves, litter grabbers, hand sanitizer, bug repellant, sunscreen and safety vests, and also picks up the trash once the cleanup is done.

“Litter is a problem nationwide,” said Hattie Lester, the city’s litter control coordinator. “It doesn’t have to be one in Suffolk. We encourage citizens to take a grassroots approach to litter and vow to clean their neighborhood themselves.”

Warren said participating in the program has been good for both the adults and the young people in her groups.

“It teaches them at a young age to respect it,” she said. “I never knew how much really was thrown out.”