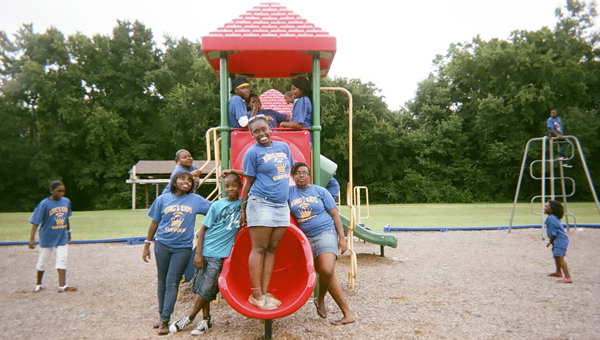 Students celebrate at the King’s Kids of America annual School’s Closing Cookout at Sleepy Hole Park in July. King’s Kids is celebrating its 21st anniversary with games and food on Saturday.

In July of 1989, King’s Kids of America started as a single site at Colander Bishop Meadows Apartments with a handful of students.

Since then, the organization has expanded to seven sites in Suffolk, where it has changed the lives of thousands of children and teens.

To celebrate its 21st anniversary, the organization is hosting a party at Heaven on Earth Ministries at 5 p.m. Saturday.

“The children we work with are jewels and gems,” executive director Betty Milteer Knight said. “It’s an honor to work with them and an honor to have worked with them. We take what we do seriously and with pride. It’s when people take interest that we can make a difference.”

In the place of the group’s usual ceremonial program, this year, there will be popcorn, cotton candy pony rides, volleyball, games, hot dogs and children’s activities.

“We wanted to do something that is exciting for the children, and allow them more freedom to come and meet our supporters and city officials,” Knight said. “What we do is about them, and we want them to enjoy their time. We hope to create an atmosphere of excitement and belonging to something.”

Knight said she also hopes to show that the community and its officials can come together to communicate.

The program is for children, ages 4-15, and focuses on involving students in positive, constructive activities to help youth stay off the street and avoid the pitfalls of crime.

“We focus on different topics throughout the year — mentally spiritually and socially,” Knight said. “[We want to] build children up and help them understand their value. It’s nothing to kill if you don’t have a proper understanding of the value of life — theirs or yours. By helping them understand their rights and the rights of others, it change the way they see things.”

When the children are old enough to graduate to the next level, they become King’s Disciples, for students ages 15-23.

“They focus more on going out into the community, such as visiting the elderly who can’t go out,” Knight said.

At the celebration, there will also be the crowning of a king and queen for each site.

The king and queen are recognized as leaders in their peer groups and excel in behavior, academics and leadership skills.

There are 275 children and teens enrolled in the program for 2010.

In the past 21 years, Knight said, more than 1,000 children have been affected by their services.

“It’s rewarding to have children coming back and seeing them grow up, get married have children and have a career,” Knight said. “We’ve had children go into the Armed Forces, medical field and become pastors. It’s just rewarding to see them come full circle and give back to the community.”

Children at the Triple T Sports Center play in the gym’s tumble bus, which will be at the gym’s National... read more