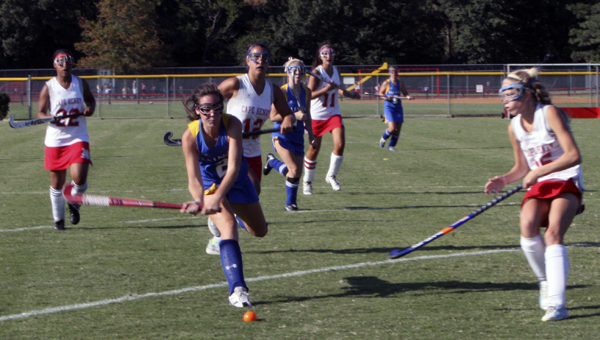 Nansemond-Suffolk junior Liza Bart Dolan scored six goals in two matches Saturday as the Lady Saints went 2-0 at a tournament at the Steward School in Richmond. Cape Henry cruised by NSA (2-2) with a 7-1 win Tuesday in Virginia Beach.

On Tuesday though, the Lady Saints learned they still have work to do to climb up the ranks of the Tidewater Conference.

In a non-conference match, Cape Henry scored three times in the first eight minutes and rolled on to a 7-1 win over NSA.

The Lady Saints couldn’t keep their winning streak going from Saturday and winning the Steward School Invitational in Richmond.

NSA (2-2, 0-0) won matches Saturday against St. Margaret’s and Steward by a combined total of 8-0, with six goals by center forward Liza Bart Dolan.

“It was a great day for the team,” Aston said. “We played with excellent teamwork and leadership across the field.”

“Everyone stopped working individually and started working as a team,” Aston said.

Against the Lady Dolphins, some of the match’s stats suggested anything but a lopsided result.

The Lady Saints were outshot 22-15, but finished the match with a 13-7 advantage in penalty corners.

A fast, literally, start by the hosts was too big a hole to climb out of. Hitting NSA with counterattacking rushes by the Lady Saint backline, Cape Henry took advantage of its chances.

Lady Saint goalie Megan Luning finished with 12 saves. NSA’s lone goal came in the 49th minute, with Julia Rapoport knocking in Emily Lewinski’s cross from near the opposite post.

“Maybe there was some anxiety today because we were facing one of the better teams in the conference. I think we got it out of our system and we’ll come out hard Thursday,” Aston said.

The Lady Saints play at Norfolk Academy, in another non-TCIS match, Thursday afternoon.