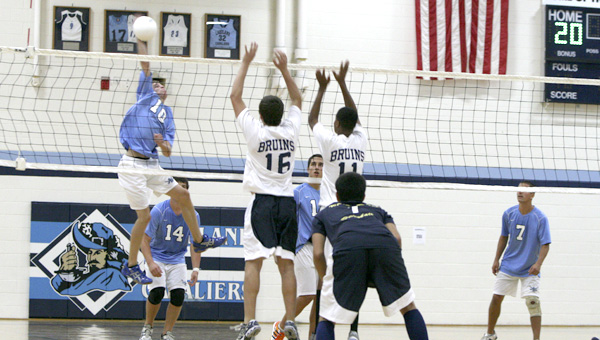 Lakeland’s boys volleyball team has made plenty of strides in the past few years. But until this week, Western Branch, a traditional power in the Southeastern District, was still a hurdle too high.

On Thursday night at Lakeland, the Cavaliers beat the Bruins for the first time in nearly 15 years of Southeastern District competition. The Cavs made it look fairly easy to boot, winning 25-23, 25-13, 13-25, 25-21.

“There was a lot of significance in that (beating Western Branch for the first time) for us,” said Lakeland head coach Daniel Waller.

Looking down the road, the match was also critical in the district standings. Lakeland and Western Branch entered the match with 3-3 records. The top four squads in the 10-school district make the district tournament.

The Cavs had to rally from behind in the opening set after the Bruins led by as big a margin as 18-13.

Michael Estienne set his brother Bobby for a kill to make it 21-20 Bruins. On the next point, Bobby passed to Michael, who, instead of his usual set for a teammate, tapped the ball over the net and down to tie the score.

With the set tied at 23, Michael Estienne set Taylor Bess for big spikes for points 24 and 25. When the Cavs needed important points, Bess was the key player above the net.

Lakeland rolled through the second set after jumping out to a 14-3 lead.

The Bruins picked up their intensity and fought off a sweep in the third set. The Bruins led comfortably the whole way after going out to an 11-4 lead.

Opening the fourth set, Lakeland returned to its earlier arrangement. Michael Estienne and Bess teamed up for four kills to lead the Cavs to an 8-4 start.

“We really got back to focusing on playing clean volleyball. Coach (Waller) says it a lot. Clean volleyball will win games,” Bess said.

“Volleyball’s a game of runs and we let Western Branch have too many of them,” Waller said. “We got back to playing relaxed and keeping thing simple.”

The Bruins fought back to a 19-18 Lakeland edge before the Cavs came up with the last run of the night.

Defensive specialist Eric Kennedy made a diving dig on a hard Bruin serve, and Kennedy’s desperate dig found an open spot on the Bruin side of the net for a key sideout and a 20-18 Lakeland lead.

Two straight Bruin hitting errors made it 22-18 and Lakeland (4-3) put the match away from there.