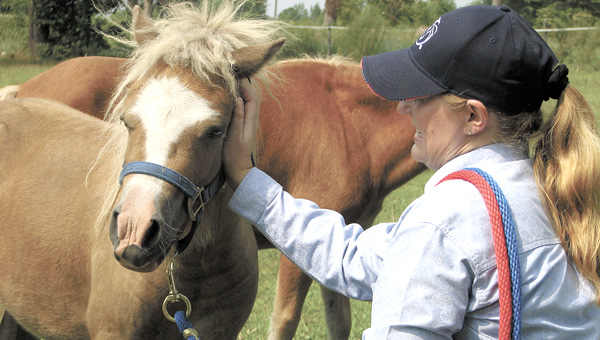 Foster farm: As a volunteer and foster farm for the Tidewater region of United States Equine Rescue League, Michele De Vinney Schmoll is most recently fostering two miniature horses. To help the region fund its mission, tickets are being sold for its Oct. 2 “Fall Fiesta.”

Judas, a paint horse, was 600 pounds underweight when the United States Equine Rescue League rescued him.

Many more horses have come in unable to walk because they were severely ill or their hooves had not been trimmed.

They were the lucky ones.

“Sometimes we don’t get horses until it’s too late,” said Michele De Vinney Schmoll, a Suffolk volunteer and foster with the league. “It’s hard on your heart to see them all skin and bones. When we got Wilbur, you could put your fingers between his ribs. His backbone was sticking up.”

To help rehabilitate the animals, the Tidewater region of the United States Equine Rescue League is selling tickets to its Oct. 2 “Fall Fiesta” fundraiser at Crazy Wing Cantina. Tickets are $10 in advance or $15 at the door for the 2-5 p.m. event.

“We have room for 500 people and with the need we’re trying to meet, we need every ticket sold,” Schmoll said. “Last year, we raised $4,000 and it was gone before it hit the bank. We took in 23 horses from Isle of Wight. Horses are not inexpensive animals. That’s why so many of them are starving. Their owners can’t afford to take care of them.”

The league’s focus is on rehabilitating starved or abused horses. According to its website, the league accepts more than 200 horses per year. It has active regions and more than 500 foster farms across North Carolina, Virginia, Indiana, Kentucky and Iowa.

As the owner of the Suffolk foster farm, Schmoll has seen first-hand the need for the league’s presence in the Tidewater area.

“There is a desperate need in our area,” Schmoll said. “If we don’t have to, we don’t want to take someone’s horse. We want to educate them and equip them to take care of it, but there are some things you can’t prevent. We even have people bring us their horses.”

After spending time quarantined, to prevent the spread of any illness, the horses often need basic training, such as learning to walk on a halter or stand to have their hooves trimmed.

More than anything else, though, they just need to eat.

“For about every 100 pounds of horse, they need to eat about one pound of feed,” Schmoll said. “When you think about the cost it takes to take care of a 1,300-pound animal — like Judas — you understand why people can’t afford to care of them.”

“If a horse comes in without medical problems it’s about $250 for us to care for them,” Schmoll explained. “If they do have medical problems, and most do, they can cost more than $1,000.”

Most volunteers, including Schmoll, end up digging into their own pockets to rehabilitate the horses.

“Who else is going to take care of them?” Schmoll asked. “You just don’t think about the money. You just think about what you can do to help make the horse more comfortable. I’ve had horses that were so bad off they were in a sling because they couldn’t stand. At that point, you’re not even thinking about the money.”

To purchase tickets in advance, call Schmoll at 652-0327 or visit www.userltidewater.homestead.com.

A Suffolk man has been arrested in connection with a Hampton murder that occurred on Wednesday. Jayson Alyosha Newkirk, 26,... read more