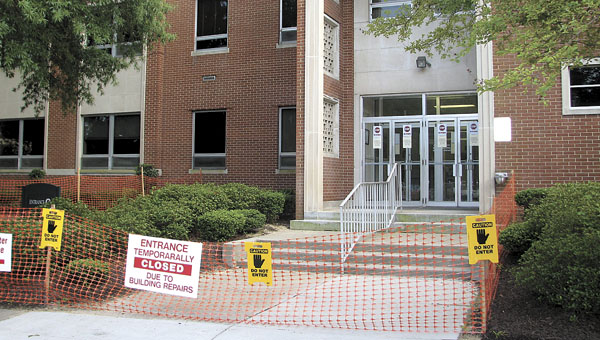 Closed: One entrance to city hall currently is closed because it is unsafe. Council members saw a proposal for a new building Thursday.

The figure includes $25.4 million to construct the building and $11.2 million for a new E-911 radio system, according to consultants from the Waller, Todd & Sadler architectural firm. The remaining cost would be for site acquisition and demolition of the current building.

The current city hall, which was built nearly 50 years ago with few upgrades since, is suffering from a number of structural and mechanical problems. A sagging slab, old age and various structural deficiencies have caused cracks in the floors, walls that are bowing and floating above the slab, and malfunctioning doors throughout the building, Deputy City Manager Patrick Roberts said in a presentation. A corroded pipe system shows evidence of long-term leaking.

Howard Collins, with the architectural firm, said the current city hall not only is unsafe, but also increases costs for utilities and maintenance, fails to meet the city’s space needs and suffers from Americans with Disabilities Act compliance challenges.

Creating a new city hall, he added, would allow additional city departments to be moved into the building and solve many of the problems the current building suffers from.

The architects proposed a new, two-story municipal center to be built at the corner of West Washington Street and Henley Place, across Henley from the new police department headquarters. The property currently is occupied by a city parking lot and three privately owned parcels.

A preliminary first-floor plan includes the commissioner of the revenue and treasurer’s offices, voter registrar, city assessor, council chambers and a “one-stop shop” for folks hoping to start a business in the city.

The city’s current emergency communications center, located on a wing of the old city hall, is located in a portion of the building particularly subject to possible failure, the architectural consultants said. Putting the center on the second floor of the new building would allow windows to be installed, creating a better working environment for dispatchers.

In addition, Motorola has stopped producing replacement parts for the police and fire departments’ current radio system. The parts supply is anticipated to begin running out in 2013. Furthermore, state requirements of interoperability mandate that systems be upgraded by 2015, making new equipment a necessity.

City Council will consider how to proceed with the plans during a future meeting.

Members of local non-profits worked together to get donated wheelchairs to where they’re needed. Here, John Woleben, of Toys for... read more