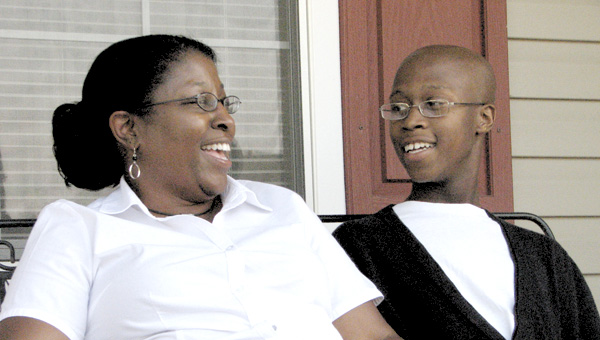 Childhood cancer: Keith Smith and mom Gisela Smith share the story of Keith’s battle in honor of September — Childhood Cancer Awareness month. Despite his treatments, Keith, 15, is living life as usual and is looking forward to next year’s football season.

Most teenage boys are worried about getting a spot on the football team or getting rid of that pimple on their forehead.

It was a bump of another kind that Keith Smith had to worry about.

“It was about the size of a pea,” Keith said recently, touching the left side of his face, above his jaw.

“We thought he bit his cheek playing basketball or something,” said his mother, Gisela Smith.

But the pea-size irritation quickly swelled to an 8-inch tumor.

“At one point, it looked like it was going into his eye area,” Gisela said.

In April, Keith became one of the 10,700 children estimated to be diagnosed with cancer in 2010. Their lives and their cause are celebrated and fought during September, National Childhood Cancer Awareness month.

“We took him to our family doctor,” Gisela said. “We thought it was just an abscess. When they took a biopsy, I thought it was just standard procedure. I wasn’t expecting that phone call when the doctor called me at work and told me my son had cancer.”

“First I was shocked, then it was dread,” she added.

Holding onto hope, she didn’t tell her son right away.

Only after a second doctor confirmed the diagnosis did it sink in.

Keith was with her then, but he didn’t understand the weight of the conversation taking place. Maybe it was because, as a 15-year-old, most of what he knew about cancer was the little he had read in his health books at school.

After meeting with a doctor from the Children’s Hospital of the King’s Daughters, the situation finally became real for Keith.

“It was coming out of CHKD that I remember,” Keith said. “The doctor gave me information and said 15 percent of people make it through.”

“The chemo was the worst part. It was hard to get used to,” said Keith.

He got sick at first and woke up in the hospital one morning to see his curly black hair on the pillow.

Every week, for 54 weeks, he has to get some form of treatment, whether in the clinic, overnight or for a week’s stay.

“It’s not anything any child should go through,” Gisela said. “As a parent, it’s heartbreaking. You just want to protect them and make it all OK.”

After months of chemotherapy, the tumor has shrunk back down to the size of a pea — something that Keith said makes him very happy because it means he may not need surgery.

While he’s battling cancer, Keith still manages to live life as usual. He gets up at 6 a.m. most mornings and goes to school, hangs out with his friends and spends time with his girlfriend.

He’s had to take a break from playing football and basketball, but he’s keeping his skills sharp and will be ready to play next season.

“You just do what you have to do,” Gisela said. “It’s been difficult. There are some days we have to talk about why treatment is something we have to do, but I’m looking forward to him getting his driver’s license and going to college some day.”

Volunteers prepare for the Wall