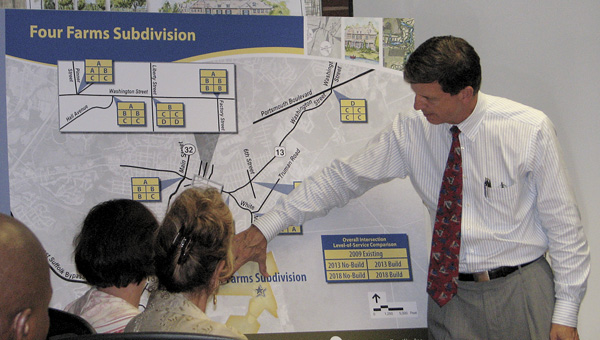 Suffolk business owners met Wednesday with the developer of a massive residential and commercial site proposed for the east side of the city’s historic core.

Whitney Saunders, attorney for the Four Farms development, spoke to a gathering of 21 downtown business owners and others at the Downtown Business Association meeting. With him was Matthew Howard, one of the principals of South Suffolk Properties LLC.

Business owners, like many nearby residents, were concerned about traffic congestion. However, they also had worries over nearby blighted properties and the effect on the city’s real estate tax rate.

“We would hope that anytime you do something as momentous as this, it would have a positive effect on the surrounding area,” Saunders told the gathering.

South Suffolk Properties hopes to put about 2,000 single- and multi-family housing units and 164,000 square feet of commercial space on 462 acres south of downtown. The development would be situated between Hosier and White Marsh roads.

It would include space for office, grocery and retail establishments, a variety of parks, lakes and open spaces, and a 19-acre site for an elementary school. The development could attract more than 5,000 residents when completed in 2018.

Single-family detached houses would cost between $175,000 to $350,000, depending on the market when they are completed, Saunders said.

The northernmost boundary of the development is just south of Seminole Drive, which runs off White Marsh Road.

The Planning Commission voted earlier this month to postpone a decision on the development until its Nov. 16 meeting to give the developers time to work with nearby residents on their concerns.

Besides Howard, the corporation’s other principals include Frank Spadea of Franciscus Homes and Bobby Arnette of Coastal Virginia Developers.

Saunders addressed traffic concerns by showing the results of the developers’ study. It predicts that most intersections in the area will be at the same level of service in 2013 and 2018, whether the development becomes reality or not.

Addressing worries about the tax rate, Saunders brought forth the results of an economic impact study, which indicates the development will pump about $4.9 million per year into the city’s coffers.

Business owners also were concerned about the local housing market, but Saunders explained the market likely would be better by the time the development is complete.

“This is forward-looking,” he said.