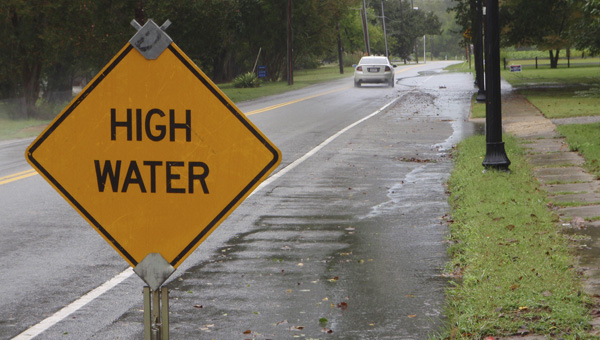 A sign warns motorists of dangerous conditions on Kings Highway in Chuckatuck Thursday. Torrential rain caused numerous roads to flood throughout the day.

A massive storm system has dumped between 6 and 8 inches of rain on Suffolk in two days, flooding roads, knocking out power to some areas and wreaking havoc with school and other schedules.

“It isn’t over yet,” said Mike Rusnak, a meteorologist at the National Weather Service in Wakefield. “There’s another wave coming up from North Carolina, but it isn’t as heavy.”

Rusnak expected the rain to continue through Thursday night and possibly into this morning.

“Maybe some morning showers, then we expect the sun to come out,” he said, adding Friday will be breezy with highs in the mid-70s.

Some buses traveling to southern portions of the city were not able to pick up all their students because of impassable roads, Bradshaw added. Those students will be granted an excused absence.

Those students who did make it to school faced some leaking roofs and high water in the parking lots. Oakland and Mack Benn Jr. elementary schools lost power, but lunch still was served and emergency lighting helped classes continue.

Bonita Harris, a spokeswoman for Dominion Virginia Power, said about 150 customers were without power in Suffolk about 4 p.m. on Thursday. The company hoped to restore power to most customers by 8 p.m. and to all customers by midnight.

Many of the customers who had lost power were in the Chuckatuck area, she said. The wider surrounding area, including Isle of Wight County, Western Branch and Churchland, included 2,400 customers whose lights were out.

Most of the power outages were because of trees and branches that had fallen, Harris said. Some wires also were blown down in the storm.