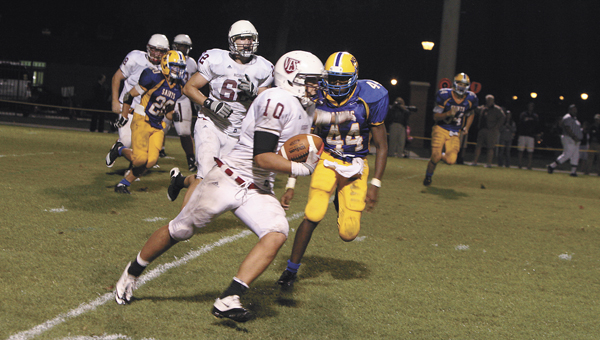 Virginia Episcopal quarterback Daniel Alexander put the ball in the air 33 times Friday night at Nansemond-Suffolk, but Alexander’s running with the ball hurt the Saints as the visiting Bishops avenged a loss last year to NSA with a 28-10 win.

Alexander was sharp through the air, completing 19 of his passes for 221 yards, a touchdown and an interception. He scored on runs of 39, 1 and 15 yards for three of the four Bishop touchdowns.

Last fall in Lynchburg, the Bishops took an early lead on the Saints, but NSA’s offense had all sorts of answers in a 38-14 game.

On Friday, the Bishops capitalized on Saint turnovers early and led the rest of the way.

The second interception put the Bishops in business at the NSA 30. Three plays later, Alexander hit Zach Jones straight down the middle of the field for a 31-yard touchdown pass. Alexander, who was also 4-for-4 kicking extra points and handled punting duties the couple times VES needed them, made it 7-0 Bishops six minutes into the first period.

Ryan May was NSA’s only steady source for yardage on the night. The senior carried 19 times for 129 yards and was very good on four kickoff returns.

A 33-yard sweep by May, out from the NSA 6, sparked a Saint drive in the second quarter. The Saints reached the VES 33 before being forced into a 4th-and-7 play.

Initially NSA lined up to punt. After a Bishop timeout, NSA put its field goal team out and Bobby Lamm booted a 50-yard field goal. It was the second straight game with a 50-yarder by Lamm.

The Bishops answered with seven, however. Alexander scrambled away from NSA pressure in the pocket and went cleanly down the left sideline for a 39-yard scoring run with 1:01 left in the half.

The Bishops made it 21-3 late in the third quarter. Going mostly through the air, the Bishops covered 80 yards in eight plays, ending with a sneak by Alexander.

Lennon came on at quarterback on the ensuing NSA possession. Led by three May rushes for 47 yards, the Saints scored with fullback Thomas Westfall going in on a 2-yard carry with 1:13 left in the third period.

Trying to cut into the 21-10 margin, NSA regained the ball midway through the fourth quarter, but the Bishops held NSA on downs inside Saint territory. A few plays later, Alexander’s third touchdown run completed the scoring.