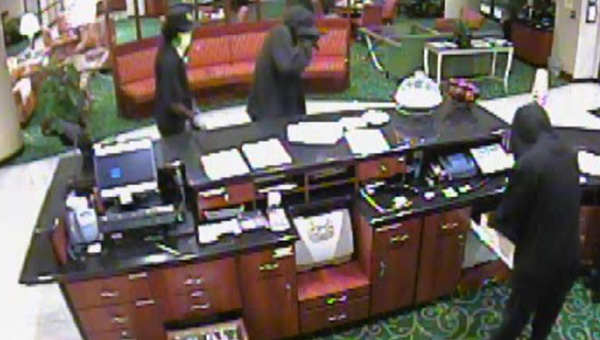 This screenshot from a surveillance video at the Courtyard by Marriott hotel on Harbour View Boulevard shows robbers taking cash from the desk clerk’s drawer. Police are seeking at least three suspects in connection with the robbery.

Suffolk police are seeking three suspects in last week’s armed robbery of the Courtyard by Marriott hotel on Harbour View Boulevard. First, however, they need help identifying them.

Police also believe a suspect cased the hotel before, using inquiries about room rates as a ruse.

According to a press release from city spokeswoman Debbie George, three black males entered the business on Sept. 29 about 11:30 p.m. The hotel is located in the 8000 block of Harbour View Boulevard.

One of the suspects waved a handgun at the clerk behind the counter, while a second suspect held the security guard at gunpoint. They forced the clerk to open a cash drawer and removed its contents before fleeing in an unknown vehicle.

The first suspect, who did not appear to be armed, wore a black hooded sweatshirt, black face covering, black pants, white gloves and black shoes with white edges and shoelaces.

The other two suspects carried handguns. One wore a black hooded sweatshirt, black face covering, blue or gray faded jeans, black ball cap, black gloves and a red bandanna hanging out his right rear jean pocket. The third suspect wore a black short-sleeve shirt with writing or an emblem on the front left chest area, black ball cap with writing or an emblem on the front, and had black hair that poked about two inches from under the ball cap. He also had a multi-colored bandanna covering his face, blue jeans, white or gray gloves and dark-colored shoes.

Police also are seeking a black male who came into the hotel about 17 minutes before the robbery. He had black, close-cut hair and wore a black jacket with a white T-shirt, blue jeans and dark shoes. After asking about room rates, he took a cookie from a covered plate by using a napkin to lift the cover, the release said.

Anyone who has information about the crime or the suspects’ identities is asked to call Crime Line at 1-888-LOCK-U-UP. Callers to Crime Line never have to give their names or appear in court, and may be eligible for a reward of up to $1,000.