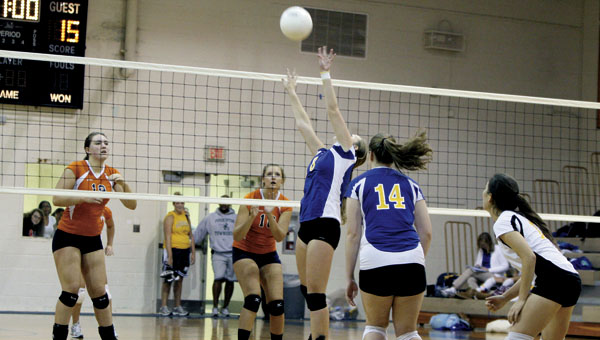 Setting up: Nansemond-Suffolk’s Quinby Hines sets during the third set of Tuesday’s Tidewater Conference match at Norfolk Academy. Hines led the Lady Saints with 14 assists. Norfolk Academy turned around a loss earlier this season to NSA with a sweep, 25-11, 27-25, 25-19.

NORFOLK—Norfolk Academy avenged a girls volleyball loss earlier this season to Nansemond-Suffolk by routing visiting NSA in straight sets, 25-11, 27-25, 25-19, in the Tidewater Conference match-up for the two schools Tuesday night.

The Lady Saints (8-6, 1-1) won fairly comfortably, in four sets, over the Lady Bulldogs (9-4, 1-1), three weeks ago in Suffolk. NSA worked its way in front for parts of sets two and three Tuesday, but the second set was the only real chance the Lady Saints had to get back in the match.

Norfolk Academy completely cruised through the opening set, getting out to a 10-2 lead that grew even larger from there.

Except for perhaps limiting some of the home team’s momentum, it probably would’ve made little difference in the outcome of the first set, but the Lady Saints strangely misjudged a number of close NA serves and shots that fell just on the NA side of the lines.

Five NSA players put down kills early in the second set and the Lady Saints moved out to a 10-4 lead. Norfolk Academy answered straight away, rolling off five straight points to a 10-9 score and tying the set at 12-12.

NA led 23-20 before NSA got a side out and an NA spike sailed long, for one of the only Lady Bulldog shots NSA judged accurately, to make it 23-22 NA.

Kelsie Halberg tapped a kill over an NA blocker and Kaylor Nash slammed a shot off an NA blocker for a kill to give NSA a set point, 24-23.

With a kill and an NSA error, the Lady Bulldogs moved back in front and NA went on to win the close set.

The final set went back and forth until NSA held a 17-16 lead. NA took the lead with a 5-0 run and finished the match with four straight points.

The Lady Saints face another difficult conference test Thursday evening at Cape Henry. The Lady Dolphins are the defending TCIS and state champions. NSA lost to Cape Henry in three sets in its first match of the season.