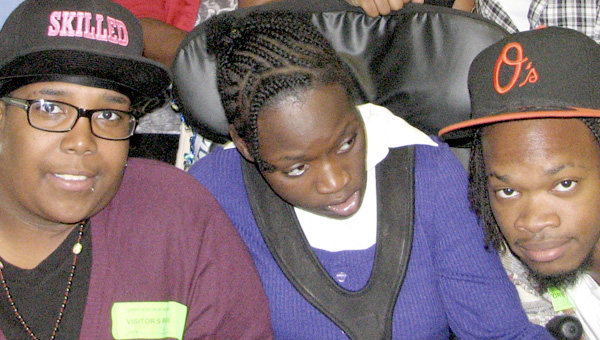 Homecoming court: Jade Brown, in center in the front, is surrounded by classmates who volunteered with her campaign on the homecoming court at Lakeland High School.

Jade Brown is not on Lakeland High School’s field hockey, basketball, track or volleyball teams as were the other three queen candidates on the school’s 2010 homecoming court.

It was her school spirit that won her the votes of her peers, who selected her for one the four queen candidate seats on Lakeland High School’s 2010 Homecoming Court.

“This is an awesome example of how the faculty, staff and students are family,” said Principal Thomas Whitley. “We love, care and support each other. We don’t see anyone here being different. We’re all Lakeland Cavaliers and that means something here.”

Jade, who is graduating this year, is a fifth-year student at Lakeland High School. She is in the school’s special education program and communicates through sign language and other non-verbal means.

Her sister, Latoya Rice, pushed Jade in her wheelchair as the homecoming court entered the gymnasium at Lakeland’s pep rally on Friday.

“Even though I’m not physically able to do what most of you can, my yells in the hall is my school spirit,” Latoya said for her sister over a loudspeaker earlier this week. “I hope I will make a way for people like me to become part of history. I hope everyone can see that we are not so different.”

Rice was her sister’s voice as the candidates read their speeches over the loudspeaker earlier this week. She wrote two speeches for her sister to choose from. Jade clapped and nodded when Rice read the part about her school spirit.

“It was her way of picking what she wanted to say,” said Carmen Brown, the girls’ mother.

“We had a family meeting and decided we’d do it together as a family,” Brown said. “It’s Jade’s last year, and we don’t treat her any different than anyone else.”

Her family made many signs, handouts and necklaces with Jade’s picture on them to help spread the word about Jade’s campaign.

The foundation for her campaign having been laid by her family, her fellow students finished the job.

Students made signs, rallied and voted her into one of the four queen candidate slots.

“The girl’s court is usually all … sports girls,” said Andrew Williams, a Lakeland senior and drum major who supported Jade’s campaign. “We need something different. We wanted to support Jade and something positive.”

Lamonta Thorne, a senior, volunteered to help on her campaign.

“I just thought it would be nice because it’s her last year,” Lamonta said. “I did it because I cared.”

Jade is the first queen candidate for the homecoming court from the school’s special education program in the 13 years Whitley has been principal.

“We always knew Jade was a queen from the day she came home,” Brown said.