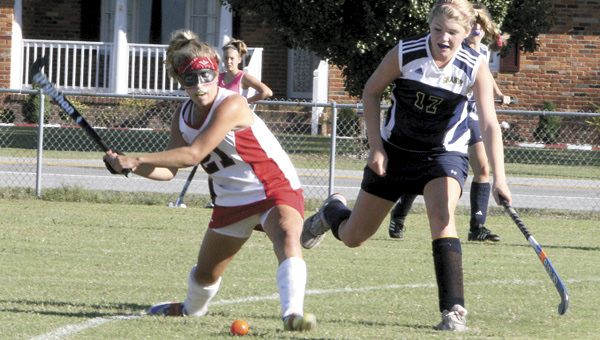 First half: Nansemond River forward Erica Dover, complete with homecoming war paint, sends a shot on goal during the first half Friday against visiting Granby. Dover scored NR’s first goal as the Lady Warriors went on to a 2-0 victory. The Lady Warriors are 8-2 overall.

The score looked close for Nansemond River’s field hockey squad Friday with its 2-0 win over visiting Granby, but the Lady Warriors (8-2) really cruised to their fourth straight victory.

It was the second win in that four-match streak over a school that’s commonly a Eastern Region Tournament qualifier. A couple weeks ago, the Lady Warriors beat Kecoughtan of the Peninsula District. Granby is usually runner-up behind Maury most seasons out of the Eastern District.

The Lady Warriors, already with a loss to Western Branch for a 5-1 district mark, have lots of work to do to be one of the two Southeastern District teams to make regions.

Nearly all of the first 15 minutes of play was played in and around the Granby goal circle. Despite getting four corners and sending eight shots toward goal in the early going, after one short spurt of Granby pressure in the Lady Warrior end of the field NR head coach Allison Mowry called a timeout.

Nansemond River continued keeping the match pinned near Granby’s goal, but couldn’t break through to take the lead until just after halftime.

Three minutes into the half Erica Dover jabbed in Shelbi Holloman’s crossing pass in from the right endline for NR’s first goal. Holloman moved with the ball down the right side and with a bunch of Lady Warriors and Lady Comets moving in on goal in the goal mouth, Dover directed the ball over the line.

It was another quick rush into the Granby scoring arc for another Lady Warrior goal seven minutes later.

Mary Gover and Erica Dover put shots on goal. Both were saved, but Granby couldn’t clear the danger and Jessica Adams got to Dover’s rebound to put it into the cage for a 2-0 NR lead.

The Lady Warriors finished with a 24-1 margin in total shots and it was 12-0 NR in shots on goal.