‘A time of healing’ 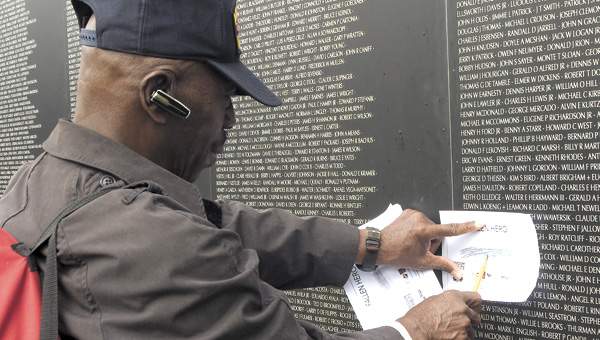 Etched name: Richard Phillips, who served in Vietnam with the U.S. Marines from June 1965 until December 1968, takes a rubbing of the etched name of a lost friend while visiting the replica of the Vietnam Veterans Memorial Wall at Bennett’s Creek Park on Thursday.

Marjorie Hickey, 85, rolled her walker across the wet ground at Bennett’s Creek Park on Thursday, stopping when she was close enough to the black panels to touch the one that bore her son’s name.

Marvin B. Smith Jr. died Jan. 11, 1966, in Vietnam. His name is number E-465 on the Vietnam Veterans Memorial Wall. On Thursday, a replica of that memorial opened for visitors, and Hickey and her husband Leon Hickey, Marvin’s stepfather, were among a few dozen who showed up, despite the rain.

“We go to all these things,” Leon Hickey said. “We’ve been to the wall in Washington four or five times. The first time was the hardest.”

His wife helped lay a wreath at the wall Thursday on behalf of Gold Star Mothers, those who have lost children in America’s military conflicts.

But for Leon Hickey, visiting the Wall — whether the original in Washington, D.C., or the 80-percent replica that tours the country — has an even greater significance.

A year after her son Marvin died in Vietnam, two of Marjorie Hickey’s other sons who were in the Army were subject to being sent to Southeast Asia. To keep that from happening, her husband volunteered at the age of 37 to go, thereby protecting his stepsons under a rule that allowed only one person from a family to be in Vietnam at a time.

Today when he visits the wall, Hickey sees more than just one name that he remembers. And he often encounters men he served with or whose actions in Vietnam had some impact on his own time there.

The camaraderie of others who served in Vietnam helps heal his wounds, he said, and his wife benefits from the love and support of other Gold Star Mothers, who understand her special pain.

As a captain in the U.S. Army, he served in Vietnam during 1964 and 1965 as an advisor and was not supposed to be in a position of combat. But his Vietnamese charge was shot and killed, and White had to carry his body back to sanctuary. He wound up injured in the line of duty during his tour.

For White, the wall’s visit to Suffolk this weekend represents a chance for healing for veterans of that war and the others represented in the “Cost of Freedom” American Veterans Traveling Tribute.

“It’s like a time of healing and recognition that was so needed, because of the selfless sacrifice of whole lives,” he said. “I’m so in awe about it.”

But White, who had been called on to share his story during an afternoon speech from the stage at Bennett’s Creek Park, said there was another benefit to having the exhibit in town — education.

“We must do everything we can to connect [young people] with freedom,” he said.

Ten-year-old Justin Hudson of the Western Branch area of Chesapeake seemed to understand.

In June, after seeing the movie “A Bridge Too Far,” he adopted a new hobby — getting the autographs of all the veterans he could meet. On Thursday, he was at the wall exhibit hoping to meet more heroes.

“I just came here to honor the veterans,” he said. “I’m proud to have met them.”

Justin had a total of about 139 signatures when he left on Thursday. He and his mother were determined to be back at the tribute after school today and then again through the weekend.

There are scheduled events at the free exhibit for the next three days, but visitors are encouraged to stop by anytime. The schedule for the remaining days follows:

Suffolk police are seeking one or more suspects who stole 15 rifles and shotguns at a local outdoors equipment showroom.... read more