Remembering those who couldn’t 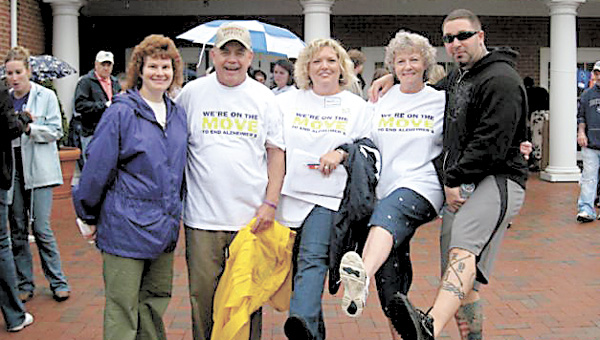 Memory Walk: The 2010 Memory Walk to benefit the Alzheimer’s Association’s research and education initiatives will be held Saturday.

William “Big Bill” Lillard spent more than 25 years in service to his country and retired as a Navy chief.

But he was fighting a different kind of fight when he passed away at the age of 79, after a five-year battle with Alzheimer’s.

He thought he was still dating his wife of more than 50 years who had since borne him four daughters, none of whom he recognized around the time of his death.

“Alzheimer’s disease is one of those diseases that you don’t give much thought to until it hits you, and then you understand how much it affects everyone,” daughter Diana Klink said. “It seems like its someone else’s disease, but when you look at the statistics and understand it, you realize it’s something that will affect all of us.”

The walk is one of nine in the Hampton Roads area that are put on by the Alzheimer’s Association.

Its goals are raise funds for a cure, provide assistance and awareness for those directly affected by the disease and to educate the community about its grave reality.

For years Alzheimer’s was misunderstood and mislabeled as senility, which led to the myth that the disease is an old person’s disease.

The reality is that Alzheimer’s is the sixth leading cause of death in the United States. The effects of the disease can become notable in people as young as in their 50s, although it is present much earlier, because it takes decades to produce noticeable effects.

“We want people to realize that this is not an old person’s disease,” said Patricia Bartosch. “More than that, the people that are affected by those with the disease are not old. It affects their children and grandchildren, too.”

“As children, we always feel parents will be there for us to support us and be our guiding hands,” Klink said. “It’s a particularly bitter battle, because every time you’re with them you lose them over and over again. It’s a cycle of loss. It’s almost a blessing when they finally pass, but they don’t know who you are.”

Even if none of your loved ones are diagnosed with the disease, doctors and healthcare professionals are warning that you will feel its effects.

If a cure is not found for the disease, as the baby boomer generation ages it could possibly bankrupt Medicaid, which makes finding a cure even more pressing.

“We have to take this seriously,” Bartosch said. “No, we don’t know what causes it, but we do know early detection can help. People need to be educated. We need people to support finding a cure for the disease, now.”

Beginning at 9 a.m., walkers can sign up the day of the event for a one- or three-mile walk. A $20 donation will earn a person a Memory Walk shirt. To make a donation to the walk, visit www.alz.org/seva.