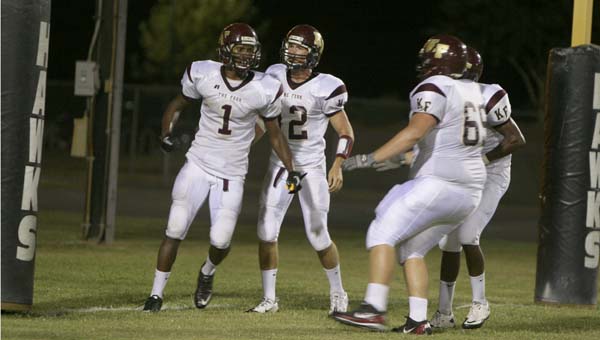 King’s Fork players celebrate Joseph Hill’s, left, touchdown catch in the fourth quarter against Indian River three Fridays ago. The Bulldogs will be going for their first win of the season at Deep Creek tonight.

The Warriors have topped the Hawks two of the last three seasons.

Heading into this year, no one would’ve guessed Hickory as a playoff contender, but the Hawks are No. 9, just on the outside looking in, in the Div. 6 ratings this week.

Nansemond River got big plays with Stevon Simms’ 94-yard kick return for a touchdown and Shannon Evans’ 74-yard reception for a TD, but the Warriors had no answer to Great Bridge’s offense in a 64-14 loss last Friday.

After facing Great Bridge’s excellent passing attack, the Warriors have to prepare for Hickory’s triple option offense. Hickory comes in off a 24-15 win over Western Branch.

The Bulldogs claimed this series in 2007 and 2008 before the Hornets won last October.

Even against the likes of Oscar Smith and Great Bridge, King’s Fork’s defense has kept the Bulldogs in the game for a half or so. Grassfield beat King’s Fork 35-7 last Friday.

Deep Creek started out 0-3 before a pair of wins, including a 37-7 win at Nansemond River. The Hornet running game was their big edge over the Warriors.

Lakeland’s been in the game in the fourth quarter in four of their six games this season. Last Friday, the Cavs led Indian River 22-14 before the Braves scored 11 points in the last seven minutes to win. Rackwon Johnson rushed for 126 yards and Walter Boykins threw for 128 yards for the Cavs.

The Tigers come in off a 28-0 win against Deep Creek. Oscar Smith’s won 33 straight Southeastern District games and is ranked No. 2 in the state (Group AAA, Associated Press).

The Saints are virtually out of contention to reach the postseason and defend their state title, but they are still one of five Tidewater Conference teams (out of six schools) with one loss in conference.

Falling behind early has plagued the Saints all season. The Bulldogs have suffered lopsided losses in all five games, with a 34-14 loss to Greenbrier Christian as the closest margin. Norfolk Academy gave away six fumbles in losing 35-10 to Bishop Sullivan last Saturday.

Traditionally this has been the No. 1 vs. No. 2 matchup in the TCIS, more often with Norfolk Academy coming away as No. 1.

Accents of autumn can make your home beautiful

Stores are full of autumn decorations to make your home season-ready, but if you’re decorating on a dime, you can... read more