Sam L. Callis died at the age of 92. Before his health began failing about five years ago, he was a frequent speaker at City Council meetings and ran for a seat on the body twice in the 1980s. 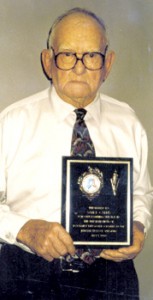 Callis: Longtime city government watchdog Sam Callis holds a plaque from Woodmen of the World, one of several organizations to which he belonged. Callis died Monday.

“Mr. Callis was a man that would speak what he believes to be right,” said current Vice Mayor Curtis Milteer, who has been on council for 30 years. “He would check around and get information … and he would come to City Council and let it be known.”

Callis farmed his land and also retired from the Norfolk Naval Shipyard. He also worked for Atlantic Wood Industries and retired from the Department of Transportation after several years as a bridge tender on the James River Bridge. He and his wife, Jessie, had four sons.

“I always called him ‘Pop,’” said George Callis, the youngest of the four boys. “Pop was a firm man, there’s no doubt, but he raised four boys that have never been in serious trouble.”

His father could often be known as brusque and abrupt, but it was only a façade, Callis said.

“Some people would say he was rough, or gruff, but he had a heart of gold,” Callis said.

He attributed his father’s political involvement to a need to “stand up for the citizens.”

“Ever since I have been old enough to know politics, he’s always been involved,” the younger Callis said. “To his last breath, he felt that way. He didn’t believe in any mess.”

Callis also was known as a frequent letter-writer to local newspapers and was dedicated to organizations he was involved in — Woodmen of the World, Driver Volunteer Fire Department, the Moose Lodge and the Ruritan Club.

Callis’ daughter-in-law, Eva Callis, cared for him through his illness.

“One thing I know, he was a hard worker,” she said. “He was a good man. He just didn’t show his emotions.”

“He kept up with the City Council,” she said. “That’s where most everyone knows him, as a watchdog. He was a good speaker.”

“Sam spoke from the heart, and he was serious about what he said,” Damiani remembered. “He didn’t come up there just to rant.”

Damiani said he appreciated Callis’ involvement, even when there was harsh criticism or disagreement.

“My style and my mantra is to speak out,” Damiani said. “I’ve always encouraged people to do likewise.”

Callis’ civic involvement extended to national politics, as well. Damiani remembered Callis as a “dedicated Democrat” who said “he’d never voted for a Republican in his life.”

“He was a critic, and he was a critic of mine, but that didn’t make any difference,” Damiani said. “People ought to express what they think.”

In addition to his four sons and their wives, Callis is survived by eight grandchildren and 10 great-grandchildren. His funeral is today.

Summit to focus on youth obesity