EMERALD ISLE — Amy Wade Johnson and Joel Gray Stadiem, of Wilson, were married in a double-ring ceremony May 1 at Chapel by the Sea. Dr. William M. Presnell officiated at the 5:30 p.m. ceremony.

The bride is the daughter of Mr. Robert Wayne Johnson, of Suffolk, Va., and the late Mrs. Linda Eure Johnson. She is the granddaughter of the late Mr. and Mrs. Lucius Harding Eure and the late Mr. and Mrs. Shepard Wade Johnson Junior, all of Suffolk, Va. She graduated from Lakeland High School in Suffolk, Va., and Barton College with a Bachelor of Science degree in physical education. She was a member of Delta Zeta Sorority. She is a teacher and coach at Springfield Middle School and is pursuing a graduate degree at East Carolina University. 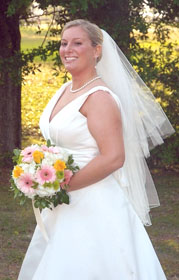 The bridegroom is the son of Mr. and Mrs. Arthur Monroe Stadiem, of Pine Knoll Shores. He is the grandson of Mrs. Sue Jones Watson, of Kinston, the late Mr. Paul Henry Watson, and the late Mr. and Mrs. Jacob Ernest Stadiem, all of Kinston. He graduated from Kinston High School, the University of North Carolina at Chapel Hill with a Bachelor of Arts degree in economics, where he was a member of Chi Phi Fraternity. He received his Juris Doctor from Wake Forest University. He is employed as an assistant district attorney for the 7th Prosecutorial District of North Carolina.

The bride was escorted by her father. She wore an ivory silk gown adorned with a fitted bodice with twisted strap detail, pleated cummerbund sash, and full, box pleated skirt with a chapel-length train.

She wore her paternal grandmother’s engagement ring and mother’s pearl necklace. Her brother presented her with a pair of custom-made pearl earrings to wear as her “something new.”

She carried a hand-tied, silk wrapped bouquet of white hydrangeas, pink gerber daisies, lime button mums and berries and four yellow roses in memory of her mother. Also attached to the bouquet was her baby locket that contained her mother’s bridal and engagement portraits.

The groom’s father served as his best man.

Mrs. Claudia Eure Copeland, aunt of the bride, and Mrs. Doris Pierce Johnson, cousin of the bride, both of Suffolk, were the Scripture readers.

Following the ceremony, a reception was held at the North Carolina Aquarium-Pine Knolls Shores. The father of the bride hosted the event. Music was provided by Sammy O’Banion and the Night Shift Band. Mr. and Mrs. Clint Byron Carter and family of Wilson were reception greeters.

On the eve of the wedding, a rehearsal dinner party was held at the History Place in Morehead City, hosted by the groom’s parents.

A bridal brunch was held at Beaufort Grocery. Family and friends of the bride and groom honored them with several parties, showers and dinners throughout their engagement.

Upon return from a wedding trip to the British Virgin Islands, the couple is residing in Wilson.