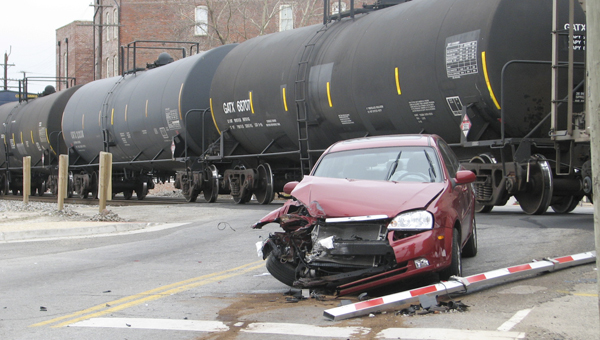 A four-door car was damaged Tuesday when it was struck by a train at the East Washington Street crossing near Pinner Street.

Police and Norfolk Southern officials are investigating an accident involving a train and a car at the crossing on East Washington Street near Pinner Street.

“I’m just shook up,” said Veda Mercer, who was driving the car. “I could have been killed.”

Mercer said she was driving eastbound on East Washington Street and was crossing the tracks when the rail crossing gate on the east side of the tracks began to come down.

She said she began to back up, but became trapped by the gate coming down on the west side of the tracks. The westbound train hit her vehicle and caused heavy damage to the right front corner of her four-door car.

Mercer declined an ambulance transport to the hospital.

According to Chapman, Norfolk Southern staff said the vehicle was stopped on the track and tried to back off.

The train included eight loaded freight cars carrying a variety of commodities, as well as 18 empty cars of various types, Chapman said. At that location, trains travel at 40 miles per hour.

The crossing used to be a quiet zone where trains did not blow their horns. However, the quiet zone for that crossing was deleted when Federal Railroad Administration rules changed.

Mercer said she did not remember hearing a train horn during the incident.

Part of East Washington Street was closed while police and Norfolk Southern officials investigated the accident.

Portsmouth police on Tuesday arrested two men, including a Suffolk resident, after a vehicle chase that ended in Suffolk. Driver... read more