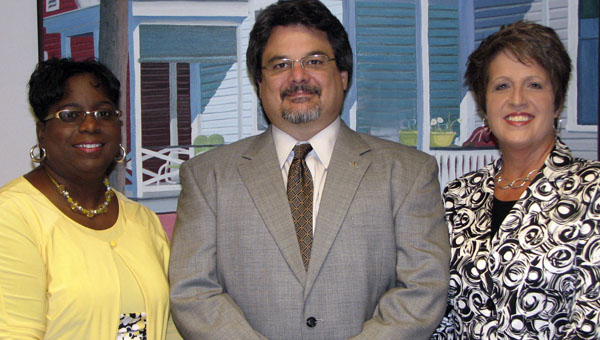 Dr. Joe Edenfield of Franklin has been named as the new vice president of financial and administrative services at Paul D. Camp Community College.

He assumes his new duties July 1 after serving as assistant professor and dean since 2004. The vice president post was left vacant when Pete Parker retired in 2009. Human Resources Manager Annette Edwards has been filling in on an interim basis since that time.

Edenfield was working at Patrick Henry Community College when he accepted the job at PDCCC. He moved to Franklin with his wife, Kristy, and children, Christian and Hayden.

“Dr. Edenfield is well qualified for these increased responsibilities and leadership challenges.” PDCCC president Dr. Paul Conco said. “His teaching skill, dean’s experience, formal education and CPA (certified public accountant) all prepare him for success in the role as vice president for financial and administrative services.”

In an interim, one-year term, the Franklin campus dean’s duties will be shared by Renee Felts and Trina Jones.

Felts, professor of information systems technology and faculty member since 2001, will be the acting dean for academic functions.

She was honored with the 2009 Excellence in Education Award, which required nomination from her peers. Felts serves on three state committees, and at PDCCC, has served as Faculty Association president since 2008. She earned her master’s degree at Old Dominion University and is working on a doctorate in higher education leadership at North Central University.

She lives in Courtland with her husband, Michael D. Felts. They have two children, Hillary Drake Brock and Taylor Morgan Felts.

Jones also will serve as acting dean and will handle student service functions at the college. An instructor and professional counselor, she has been with PDCCC since 2007.

She earned a Bachelor of Science degree in general business with an emphasis in marketing in May 2000 and a Master of Arts degree in urban education, guidance and counseling. Both degrees were obtained at Norfolk State University.

She is an associate minister at Palm Tree Baptist Church in Suffolk and the author of the book, “Walking in My Calling.”

She lives in Suffolk with her husband, Ronald. They have two children, Travis and Gabrielle.

“We are grateful that they have accepted these challenges and opportunities,” Conco said about the acting deans. “They have proven themselves great advocates of our students and competent in their professions.”

The college also will hire a part-time student activities coordinator to help support the counselors.

Soulful performances planned for the Center