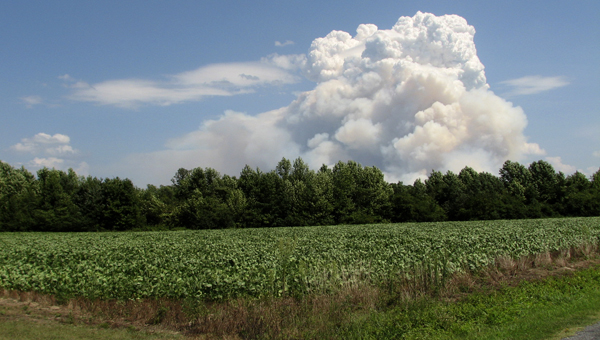 The smoke from a 2,500-acre wildfire in the Great Dismal Swamp billows above a field of crops as seen from Hosier Road.

A fire in the Great Dismal Swamp National Wildlife Refuge mushroomed in size Sunday and Monday, growing to an estimated 2,500 acres Monday afternoon after a Saturday estimate pegged it at 200 acres.

It now equals half of the total acreage of the 2008 South One fire in the same area, which burned for four months and was the most expensive fire in Virginia’s history.

“Mother Nature had a fire day,” said Barb Stewart, incident information officer. “The current weather pattern is ugly, so we knew we would have very active fire behavior.”

The fire was first spotted Thursday evening by the personnel on board a plane traveling home from fighting wildfires in North Carolina. At that time, it was two fires — one estimated at 15 acres and another burning a single tree.

With the astronomical growth of the larger fire, it has engulfed the smaller blaze.

The fire is burning southwest of Lake Drummond, in part of the same area burned by the 2008 blaze. Stewart said it is possible this fire will grow larger than its predecessor.

“This is going to go on for weeks,” she said. “The numbers are only going to go up for a while.”

The good news, she said, is that the fire currently is contained within the refuge and there are no structures threatened. It is most likely to grow to the east and south, where it has plenty of room to spread before it hits civilization, she added.

At this point, smoke is the greatest danger to the public. People should watch the weather report to stay informed on what direction the wind is blowing, Stewart said, and stay inside if they have respiratory conditions that make them more susceptible to the effects of smoke.

The inferno is spreading so quickly because it has had near-prime fire conditions the last few days — high temperatures, wind and relatively low humidity.

Equipment and firefighters are coming from up and down the East Coast to help fight the fire, Stewart said. The command will adapt to the size of the incident as it goes on, she said, but right now the U.S. Fish and Wildlife Service is marshaling all its resources for the blaze.

The cause has been determined to be lightning because there were lightning strikes in the area recently, according to National Weather Service maps. There is no work being done in the area, and it is about a mile from public access.

Stewart said the lightning strikes could have smoldered from a week to 10 days before conditions grew ripe for them to develop into larger fires and be discovered.

The 2008 fire, sparked in June by logging equipment, burned under similar weather conditions for much of its duration. It smoldered for four months until a series of coastal storms finally put it out completely. It burned 4,884 acres and cost more than $12 million.

Because of the fire, Lake Drummond is closed to boating and Railroad Ditch Road is closed to all public use activities, including scheduled tours, until further notice.

More than 50 wounded warriors will be fulfilling a lifelong dream in Suffolk this weekend. The men and women, who... read more