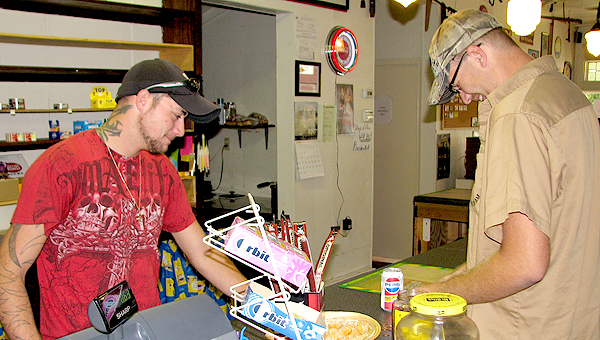 Richard Broadbent, one of the co-owners of Whaleyville General, sells a soda to Alex Moravec on Tuesday morning. The store is trying to stock items needed by the community, the owners said.

The old general store has been a hallmark of Whaleyville for decades, but lately the store doesn’t seem to be able to keep a manager very long.

The Broadbent family hopes to change that. Butch and Debbie, along with their 23-year-old son Richard, re-opened the store in July. The former Whaleyville residents say they’re trying to help the community’s economy by bringing basic grocery items and other needs back to Whaleyville.

“We’re trying to get a lot of little things in here so people don’t have to go up to Walmart or Farm Fresh,” Richard Broadbent said.

“And not be overpriced,” his mother added.

The store had been closed for a couple of months when the Broadbents began renting it. They signed a one-year lease with option to buy at the end, Richard Broadbent said.

Closing the store hurt the community because people had to go nearly all the way to Suffolk to find another store where they can get many of the items Whaleyville General now carries.

The family spent several weeks cleaning the store and then opened at the end of July. They have stocked a variety of food items, emergency supplies such as batteries and flashlights, and more.

They also hope to get some basic hardware and automotive care items in the store soon.

“We’re trying to keep it low-key but still have stuff people need and want,” Debbie Broadbent said. “We’re just trying to cater to the community.”

“We make our food fresh,” Debbie Broadbent said. “We make them as you order them because we don’t want food sitting.”

People can call in their orders, Broadbent added. The barbecue is purchased from Nixon’s, but everything else is made on site.

“Our food has taken off like wildfire,” Broadbent said. They’re offering free coffee to firefighters and police officers.

The family even is trying to arrange to have live music from local musicians at the store.

The biggest problem they’ve encountered so far, she said, is that some people still don’t know the store is open again.

“The hunting season just started, so we think it will pick up,” Debbie Broadbent said.