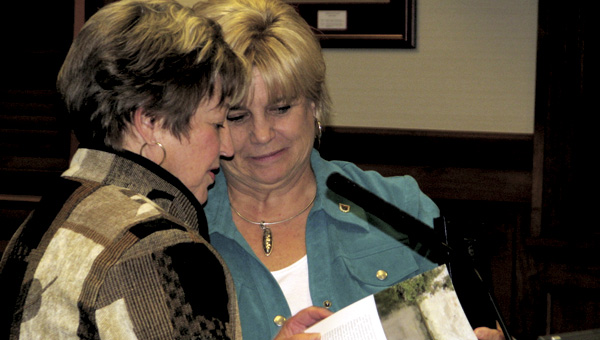 About half of the Sister Cities delegation arrived at Wednesday’s City Council meeting to present gifts to Mayor Linda T. Johnson from Mayor Pietro Della Libere of Oderzo.

“It was an awesome trip,” said Mary Jane Naismith. “They always are.”

Oderzo is a Sister City of Suffolk because it is the hometown of Amedeo Obici, who founded the Planters Nut and Chocolate Company and founded Louise Obici Memorial Hospital in honor of his wife.

The 18 ambassadors from Suffolk went for five days in September, stayed with Italian families, discussed ways to strengthen the ties between the two cities and saw a variety of sights in Italy. They paid their own airfare, and all activities and meals in Italy were paid for by Italian citizens, businesses and local governments.

The visitors were treated to a tour and reception at Amedeo Obici High School, where a Mr. Peanut statue stands at the entrance. The statue was a gift from Suffolk to Oderzo in 2004.

The visitors also took in a castle, winery, grappa factory, the Roman ruins and the Dolomite Mountains, where a surprise snowfall canceled their tram trip to the top of the mountain. They also visited Venice and toured La Fenice, the famous Venice Opera House.

They also met with city and regional officials, including Franco Manzatto (roughly the equivalent of Virginia’s lieutenant governor, Naismith said) and Mayor Libere. Naismith and Libere toasted to an agreement to exchange Oderzo wine and cheese for Suffolk peanuts.

A gift from Suffolk’s Mayor Johnson, a wooden bowl, will be displayed in Oderzo’s city hall, and Libere sent gifts to Suffolk, as well.

The gifts include a paperweight with the official city seal of Oderzo as well as a publication with photos of Oderzo. Johnson said they would be displayed in city hall.

The Italians also accepted an invitation to come to Suffolk next year, Naismith said.