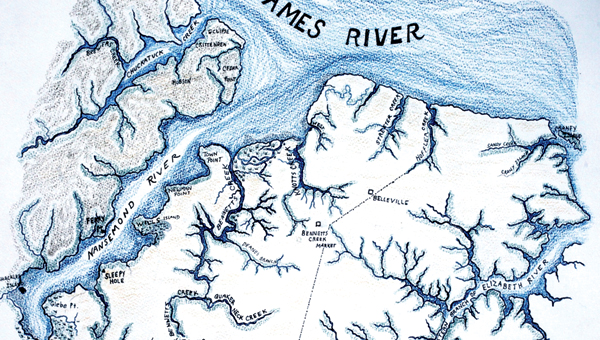 This working map shows the area in North Suffolk that will be the subject for a new book being sponsored by the Crittenden, Eclipse and Hobson Heritage Foundation that will cover the history of places like Bennett’s Creek and Driver.

After helping with books on the history of Chuckatuck and the Crittenden, Eclipse and Hobson area, the C.E.&H. Heritage Foundation is looking to finish up the history series in North Suffolk.

This time, the group will cover the history and stories of the Bennett’s Creek, Pughsville and Driver areas in Suffolk.

C.E.&H. Foundation member Karla Smith said the group already has started interviewing and researching for the book, and members hope to have it ready by Christmas.

“We decided we needed to complete the story of the people in North Suffolk by doing another book,” she said. “We think this is going to be another quality project.”

As it did with the other books, the group is combining history, maps, photos and interviews with community members to complete the book, which has a working title of “Peninsula in Passage,” Smith said.

“It’s the story, as told by the residents, of what it was like to live here as far back as they can remember,” she said. “It’s the story of the areas as they have changed in the last hundred years.”

However, she said, this new work will be a little different than the pieces on Crittenden, Eclipse and Hobson and Chuckatuck.

Some of the topics the book will cover include histories of some of the famous families in the area, such as the Eberwines, along with the railroad presence in Driver and information on the well-known Purple Lady.

“Anybody that has lived in this community for 10 or 15 years, remembers the Purple Lady,” Smith said. “That’s going to be a fun story.”

She said the group also hopes to reveal information about the colonial-era history of the North Suffolk localities.

“In the 17th century, pretty much all of the land on the peninsula was spoken for,” Smith said. “The history goes back just a step after Jamestown.”

Although work has started on the project, the C.E.&H. Foundation is still looking to fund the book, which it estimates will cost about $50,000.

Smith and other members of the historical group believe preserving the history of the areas in these books is good for future generations and for newcomers to North Suffolk.

She said it is important to get these stories now, because the people who know them are getting older.

“We’re going to lose those stories otherwise,” she said.

To contribute to the book, either with personal stories or photos, contact Karla Smith at campkarla@aol.com.