It was unclear whether North Suffolk waterman Robbie Johnson was preaching to the converted during a Nansemond River Preservation Alliance on Tuesday.

A guest speaker at a packed alliance meeting in the Eclipse Ruritan Hall, Johnson told folks of his “armchair science” regarding the decline and recent resurgence of Nansemond oysters. 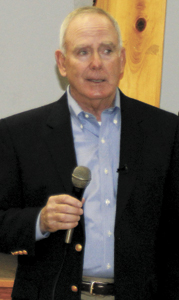 Eclipse waterman Robbie Johnson addresses a Nansemond River Preservation Alliance meeting on Tuesday. Johnson told the Eclipse Ruritan Hall gathering about his and son Ben Johnson’s life on the water, and what he regards as the failure of the government to replenish oyster stocks.

“Whatever makes common sense to me makes the most sense,” Johnson declared of his methods.

He cited two factors he believes contributed to the demise of oyster stocks in the river, which supported a booming oyster industry in the 1800s and early 1900s before a decline set in, culminating in a “drought” through the 1980s and 1990s.

Storms in 1933 and 1953 washed away the reefs upon which oysters set, and the damming of the watershed with growing urbanization reduced freshwater flows into the river and increased salinity well beyond the mollusks’ comfort level.

“Really what we did was cut the fresh water off when the oysters themselves were in a period when they were really stressed,” Johnson said. “The oyster industry in the state of Virginia … has been somewhat on the slide since then.”

Many in the scientific community who once blamed the decline on over-fishing by men like Johnson are beginning to see things differently after weather events in 1999 laid the groundwork for a recent resurgence, he said.

Hurricanes Dennis and Floyd broke dams and brought a lot of fresh water back into the system, he said.

“Oysters started making a comeback and are still doing OK today,” he said, adding that oyster disease MXS, first seen in Virginia in 1959, was also dealt a blow.

“We are still operating off that; that’s what really brought it back in this area … to better than it was in the 1980s,” he said.

Johnson expressed his support for introducing into the Nansemond non-native oysters that might help further replenish stocks.

“Restoration efforts being put forth are, in my opinion, a tremendous waste of money. The (U.S.) Army Corps of Engineers has now gotten involved … and since they get federal money, their pockets are deep. If they had to spend their own money … they would use a little more common sense.”

Johnson acknowledged that an introduced species “might rub a lot of you here in the wrong way,” but he said that it would also help clean up the river by resulting in more water-filtering oysters.

Without such intervention, Johnson believes conditions will at some point return to how they were in the 1980s.

“I tell my son he needs to keep saving his money, because there’s another drought coming,” he said.