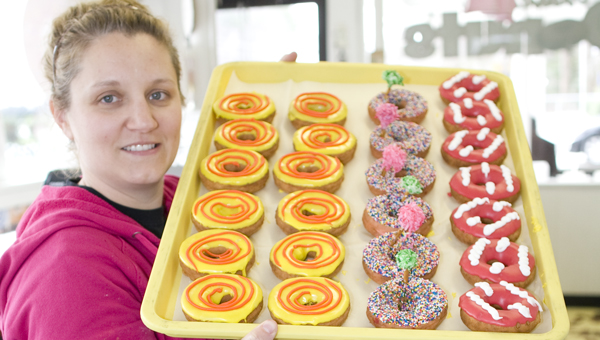 O’doodleDoo’s owner Reeva Luecke shows off decorated doughnuts in her Bridge Road shop earlier this year. She was invited to be in a Cooking Channel show that will begin airing next month.

North Suffolk doughnut shop O’doodleDoo’s will be featured in an episode of Cooking Channel “Donut Showdown” that will begin airing next month.

Owner Reeva Luecke taped the episode Dec. 2, squaring off against other doughnut makers from California and British Columbia in a “mystery ingredient elimination round.” The two who advanced from that round went face to face making three doughnuts with a “High School Cafeteria” theme.

The eventual winner of the show took home $10,000. But though the episode already has aired on the Canadian version of Food Network, Luecke isn’t allowed to reveal if she got the cash.

Luecke said the producers of the show called her last year and asked if she wanted to do the show. It was taped in Toronto, Canada.

“It was an experience,” she said. “It takes a long time. It takes an entire day just to film that little 22-minute segment, or whatever it is.”

Even so, Luecke said she was excited to be chosen for the show.

“We feel that it was a cool experience that they found our little doughnut shop in Suffolk, Va., and asked us to go,” she said. “It was a lot of fun. It’s neat when you’re a foodie and you watch these shows and then get to go be on one.”

However, Luecke said the experience has spoiled her previous enjoyment of cooking competition shows.

“I can’t watch any of those shows anymore,” she said. “Now I know what those contestants are going through, so it causes me anxiety.”

Luecke also said she enjoyed the travel in Canada, adding she got the chance to eat at some great restaurants and see the sights after the taping.

She already has seen the episode — they sent her a DVD — and said she is pleased with how it portrays the competition.

“I was nervous, because you don’t know how they’re going to portray you on television, but they’re really nice, so you hope they do the right thing,” Luecke said. “That was something we took from the experience, too. We realize this is their business. We make doughnuts; they make TV shows.”

Luecke said she doesn’t foresee having her own cooking show anytime soon, but she is happier that way. She can continue serving Suffolk residents with her wacky and delicious pastries at the Bridge Road shop.

A gas grill accidentally left on overnight nearly resulted in a tragedy in the Eclipse neighborhood Saturday. Mona and Kenneth... read more