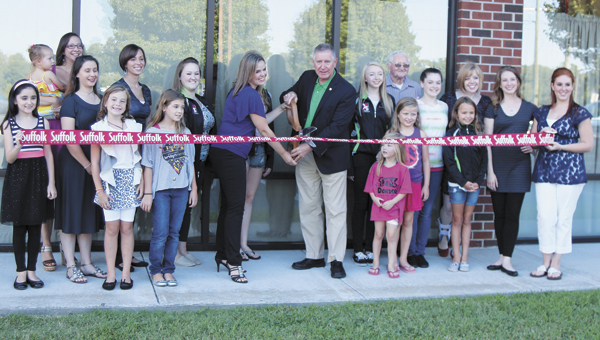 After consolidating its Smithfield location and merging classes into a single space at Harbour View, the dance school now has five classrooms, Director Kristen Holland-Burgess said.

“We now have more convenient times and more class options,” she said. “We have 13 teachers who are specialists in their areas.”

Its students have won various awards, including most recently in the Encore and NexStar dance competitions and Epic Brands Colonial Championship, and Coaster Cheer Competition at Kings Dominion.

Students also participate in community events, such as the Peanut Fest and community parades.

“It is such great news when a company can both celebrate an anniversary and decide to continue to grow with us in Suffolk,” Mayor Linda T. Johnson stated in a news release.

“We are proud Dynamic Movements is expanding and offering diverse opportunities for our citizens and the surrounding community.”

Standing in for Johnson at the ribbon-cutting event was the Sleepy Hole Borough’s City Council representative, Roger Fawcett.

“We are very excited that you are here,” Fawcett told the large gathering of parents and students. “I’m excited this is located in my borough.”

Jennifer Spencer, who has two children attending the dance school, said parents like her appreciate the extra classes and convenience that the expansion brings.

More information on the dance school can be found at www.dynamicmovements.com or on Facebook.