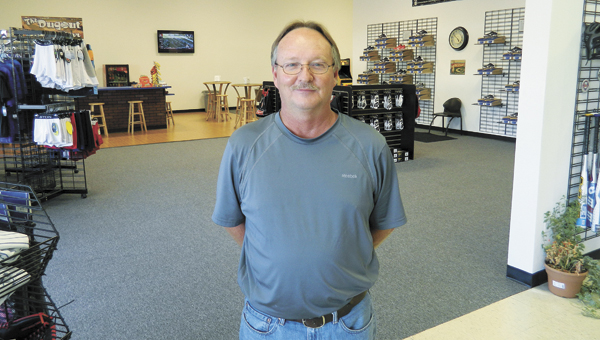 Sluggers Batting Cages and Pro Shop co-owner Orel Schleeper stands in front of the opening in the wall that did not exist before the business’ recent 6,000-square-foot expansion. The new space allows additional services, including more retail, a full snack bar, on the far left, arcade games, and an area in back which will soon include two 70-foot-long retractable pitching and batting cages.

A new expansion to the Sluggers Batting Cages and Pro facility in the Suffolk West Shopping Plaza on West Constance Road will help it better serve high school teams and make it more family-friendly, its owners said.

“We were out of room on the other side,” co-owner Orel Schleeper said, referring to the original 10,000-square-foot portion of the facility. He oversaw a complete renovation of the additional space, which adds 6,000 square feet to the facility.

“The goal was to be able to have high school teams come in and train at Sluggers, not just with hitting, but now with pitching and catching,” co-owner Jeff Meyers said.

Sluggers has always had batting cages, but it was formerly unable to cater to high school teams because of its lack of pitching space, which requires at least 60 feet. The expansion also allows for two 70-foot-long retractable pitching and batting cages.

The expansion has been open to the public since Sept. 14, and while the cages are not expected to arrive until next week, the area is already available for pitching.

The facility will now have the capability to bring in more teams for winter training.

Meyers said teams could rent the whole 70×24-foot space, which will encompass both cages, or just one.

Meyers said he and Schleeper talked to the landlord a year ago about just expanding to part of the additional real estate, but they were told they had to take all of it or none of it.

They pondered what they could do with 6,000 square feet since the cages could not extend all the way to the glass storefront. Therefore, Meyers and Schleeper have used that area and a strip down the sidewall for two purposes.

The first is to help make the location ideal for the whole family, with the addition of coin-operated arcade video games, air hockey, pool tables and a full snack bar with a high-definition television to watch sporting events.

Meyers said they are currently getting information from the health department on what will be necessary to serve “real food.”

“We also wanted to bring in more retail,” Schleeper said, alluding to the second purpose for the new storefront space.

“There really is nobody in Suffolk who sells a full line of baseball/softball footwear,” Meyers said, but Sluggers does, including both cleats and turf shoes.

The expansion has required Meyers and Schleeper to hire another part-time employee, bringing the total to nine.

An unused room in the back of facility amounting to almost 1,000 square feet could serve as a multi-purpose event room or even a kitchen, which could prompt additional hires.

“We’re excited that we’re able to offer more to the city, and hopefully the city will respond,” Meyers said.