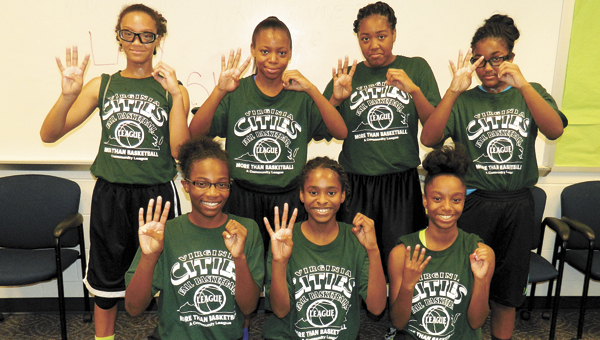 The Suffolk Lady Storm of the Virginia Cities Fall Basketball League gesture to communicate their record of 4-0 after defeating Chesapeake (Perry) on Saturday by the score of 25-19. Front row, from left: Ashly Robertson, Makaylyn Davis and Kaylah Brown; back row, from left: Necole Brown, Briana Autrey, A’lera Linton and Brianna Copeland. Not pictured: Camry Harris, Makayla Dickens and Hayley Duckett.

As the fourth week of the Virginia Cities Fall Basketball League progressed on Saturday, the Suffolk Lady Storm continued doing what they have done every week. They used strong defense to overcome their latest opponent, Chesapeake (Perry), by the score of 25-19 at the Creekside Recreation Center, improving their record to 4-0.

Suffolk competed this time without one of its best players, eighth-grade small forward Camry Harris, who had a prior engagement. The Lady Storm managed to jump out to a 13-point lead, but it shrunk to single digits in the final minutes.

The team’s head coach Tom Lewis acknowledged it was the closest contest of the season, saying, “We could have very easily lost this game.”

Nevertheless, when asked for an overall impression, he said, “I felt pretty confident that we would compete.”

Confidence was also evident among the players on Saturday after the team’s fast start this season continued.

Seventh-grade small/power forward Necole Brown agreed the squad has that potential, and said, “All of our talent mixed together makes a pretty good team.”

The league, which is for girls ages 11-14, also includes teams from Newport News, Virginia Beach and two from Chesapeake.

Lewis said Suffolk has not had this kind of start in previous seasons, but he alluded to why it has happened this year when he said, “I like the way we compete defensively.”

His confidence in the defense is such that no matter how high or low the score, he believes his team will limit the other to fewer points.

Autrey is no small part of the reason Lewis feels this way. Her answer for what she brings to the team was simple: “Defense. I’m all about defense.”

Speaking to what her team has done to be so successful thus far, she said, “Defense wins games, so that’s probably the biggest thing, and then defense comes back to offense,” she said.

Harris has spearheaded the offensive effort in past games, but it was Brianna Copeland who did so on Saturday, leading the Lady Storm with eight points. Autrey and Necole Brown contributed six apiece.

In addition to citing her as another one of the team’s standouts, Lewis complimented Brown for having a big game on Saturday.

He said, “She showed me something today, and she’s just a great all-around player,” whether it be through rebounding, long-range shooting or driving.

Brown showed her focus as a player when appraising the game against Chesapeake, saying “We could have boxed out a little bit more, but other than that I think we did pretty good.”

Some of the players on the team have been with Lewis since they were in fifth grade, but he noted two brand new additions who have already become strong defensive contributors — eighth-grader Alira Hinton and sixth-grader Ashly Robertson.

“Not only are they new to the team but this is kind of their first year playing organized basketball,” he said.

Lewis said it has been pleasant to give up his time to coach the team because of the dedication the girls regularly exhibit. “They want to come out, and they want to play,” he said.

As for the remainder of the team’s season, Lewis said, “My goal is to get them to the championship game.”

Suffolk faces off against Virginia Beach at noon next Saturday at the Creekside Recreation Center.