IW abductor was in Suffolk with victim 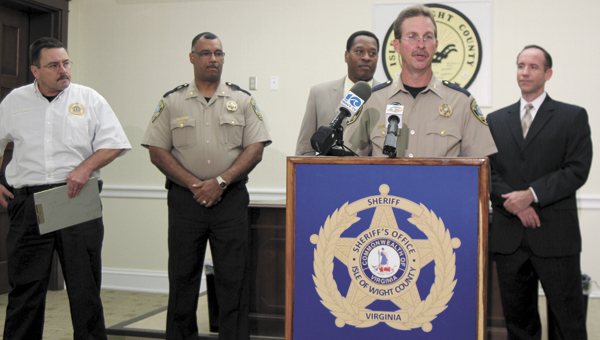 At the county’s courthouse Thursday, Isle of Wight Sheriff Mark Marshall updates reporters on the investigation into the abduction and sexual assault of an 11-year-old Carrollton girl, who reported being forced into a car near her bus stop between Brewer’s Neck Boulevard and Crittenden on Route 17 Wednesday morning. With the sheriff from his office are Capt. Rick Gaddis and Major James R. Clarke, as well as the FBI’s Willie Session and Royce Curtain.

Investigators believe a man who sexually assaulted a Carrollton schoolgirl after abducting her from her bus stop asked a Suffolk trash collector for directions during the four hours he held the 11-year-old captive.

Isle of Wight County Sheriff Mark Marshall told reporters Thursday that the man, who the girl said forced her into a white Chevy two-door coupe about 8 a.m. Wednesday, stopped to talk to the city worker at the corner of Longstreet Lane and Quaker Drive in the Holland area.

Law enforcement authorities want to hear from anyone who knows someone fitting a comprehensive description given by the girl, now released from the Children’s Hospital of the King’s Daughters and home with her parents.

“Somebody out there — several people — know this individual,” Marshall said.

The girl said the older white male is of medium build, about 5 feet 8 inches and weighing 175 pounds.

She did not see any tattoos or piercings, Marshall said, but that does not mean the suspect has none.

He was a nonsmoker, a slow speaker, and his Chevy had a Virginia state inspection, a Chevy sticker on the front windshield, black and gray interior, leather or vinyl seats and manual roll-up windows.

She said the car was older inside, Marshall said, with some pieces missing from a section of cracked dash, but the outside of the car was new-looking.

Inside the car were three homemade clay sculptures, he said — one star-shaped and painted with black stripes and the others green and pink, which the girl thought were made by children.

The sheriff identified the second assault location as near the Isle of Wight fairgrounds, in the area of Iron Mine Springs Road in Windsor, but said investigators are still working on where the first attack occurred.

At some point, the suspect may have driven his victim into North Carolina, Marshall said.

Asked if the assaults involved fondling, he replied, “We are talking much more than that.”

Force was used to get her into the vehicle, Marshall said, and “at least at some point, she was restrained.”

“There was obviously a level of preparation to this event,” he said.

Marshall noted that the man spent at least four hours away from his routine, and possibly a workplace.

People “know this person,” he said. “They probably did not realize that he’s the offender. We need to stop this.”

Marshall said the girl reported her abductor and attacker showed some remorse.

“Halfway through it … he told the victim he was going to bring her home, and did,” he said.

“That is not usual, that is not customary. But still, there is no reason to believe this is not a stranger abduction, that’s chilling — chilling for all the community.”

A dedicated line has been established for tips related to the case: 365-6290. 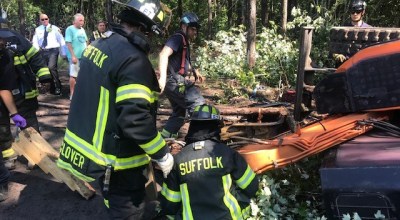 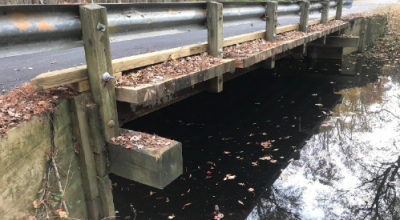