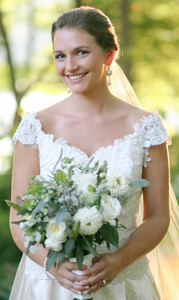 The bride was escorted by her father and given in marriage by her parents. She wore her paternal grandmother’s modified wedding gown of liberty blush satin featuring a bodice of re-embroidered Alencon lace and a conventional flowing train. She wore her mother’s full-length veil.

She carried a bouquet of cream and white garden roses and dahlias accented with wild flowers and greens.

A reception followed the ceremony at the Nansemond River Golf Club. Hosted by the parents of the groom, the rehearsal dinner was held Friday, Oct. 4 at Cedar Point Country Club.

Both the bride and groom are May 2013 graduates of the College of William & Mary Marshall-Wythe School of Law in Williamsburg. The bride is the Post-graduate Fellow for the Virginia Coastal Policy Clinic at the Marshall-Wythe School of Law, and the groom is an associate in the Norfolk law firm of Crowley, Liberatore, Ryan & Brogan. Following a honeymoon in Italy, they will reside in Norfolk.