Folks will use the power of dance to help defeat the second leading cause of cancer death in women during a fundraising Zumbathon at the Suffolk Family YMCA. 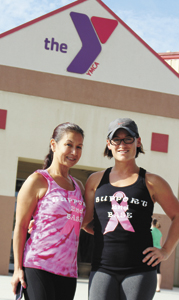 Anna Guibas and Andrea McHugh are excited about an upcoming Zumbathon at the Suffolk Family YMCA that will help fight breast cancer.

On Friday from 6 to 9 p.m., seven Zumba instructors will come together to get people moving, said event organizer Andrea McHugh, a cycling instructor at the Y.

“We will be having raffles and collecting $5 donations at the door,” she said. “Refreshments will be provided.”

The event will raise awareness of breast cancer and contribute to the Avon Walk for Breast Cancer in New York, N.Y., on Oct. 19 and 20.

McHugh has been participating in the event for seven years, she said.

“I’ve been organizing several fundraisers,” she said. “The Zumba instructors from our Y decided to help me put this on.”

Anna Guibas, its health and wellness director, said the Y has 10 Zumba classes every week, with between 15 to 40 participants in each.

“We are hoping for at least 300” at the fundraising Zumbathon, she said.

Raffles will include baskets of Mary Kay cosmetics and other prizes from Thirty-One Gifts, Starbucks, and even the Suffolk Y itself, McHugh and Guibas said,

“People will be able to purchase raffle tickets for $1,” McHugh said.

The fitness instructor said she works to raise awareness of and money for breast cancer because it “touches everyone.”

She said the event will be family-friendly and open to the general public.