Don’t go to Vegas without a Baptist. Don’t bungee jump naked. And don’t ever, ever send a man to the grocery store.

Those are the witty observations audience members will be privy to this Saturday night at the Suffolk Center for Cultural Arts, when humorist Jeanne Robertson takes the stage. 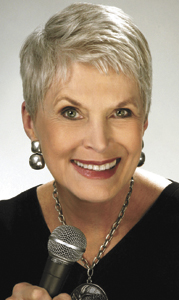 A former Miss North Carolina who won the title of Miss Congeniality in the Miss America pageant, Robertson will make audience members feel right at home with her real-life humor and Southern accent.

“You can bring your momma and your teenagers,” Robertson said in a Monday phone interview. “I just try to see the humor around me every day and tell stories the audience can relate to.”

Holding the title of Miss North Carolina jump-started Robertson’s speaking career. In the year she held the crown, she made about 500 “little speeches” at various events. After the year was up, she returned to her studies at Auburn University, but the speaking offers never stopped coming.

“It got bigger and bigger and bigger,” she said. “The word spread that I was 6 feet 2 inches tall. People said, ‘The tall, funny lady, she can come to your event and do more than cut a ribbon.’”

For many years, Robertson injected humor into thousands of conventions, industry meetings and other gatherings as one of many speakers on the agenda. But a few years ago, technology began to transform her career. Sirius radio started playing her on family comedy channels, and then her videos on YouTube began to increase in hits.

“Some people approached me from Nashville, and they said, ‘We think your name can sell tickets,’” she said. “At first I didn’t think I had that kind of visibility, but it shows the power of the Internet.”

Robertson’s 80- to 90-minute show appeals to people of all ages, she said. Her traditional following is with older people, but her play on satellite radio has increased her popularity with the younger crowd.

“People just love it,” she added. “They like it because they can identify with the humor. The laugh comes from me being more clever than trying to shock anybody.”

Robertson said she will meet with ticketholders in the lobby before and after the show and will sign autographs.

For more information or to purchase tickets, visit www.suffolkcenter.org.