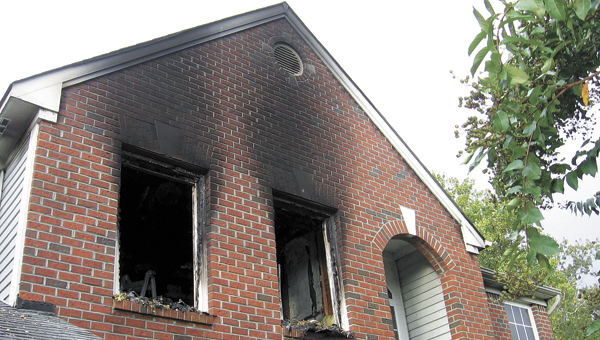 Damage to the second floor of a home on Ashmeade Court is shown after firefighters extinguished the blaze on Wednesday morning.

A family of five was displaced from their home after an early-morning house fire on Wednesday.

The fire happened in the 6400 block of Ashmeade Court in the Bristol Shores neighborhood. It was reported at 6:16 a.m., and units arrived on scene 10 minutes later.

The family of two adults and three children was already outside the home when firefighters arrived. They found heavy fire showing from the second floor, city spokeswoman Diana Klink said in a press release.

The blaze caused heavy damage to the second floor and attic area, as well as smoke damage throughout the home.

One child was evaluated by medics at the scene and released. The family is being assisted by the American Red Cross. There were no injuries to firefighters.

The Suffolk Fire Marshal’s Office is investigating the cause of the fire.