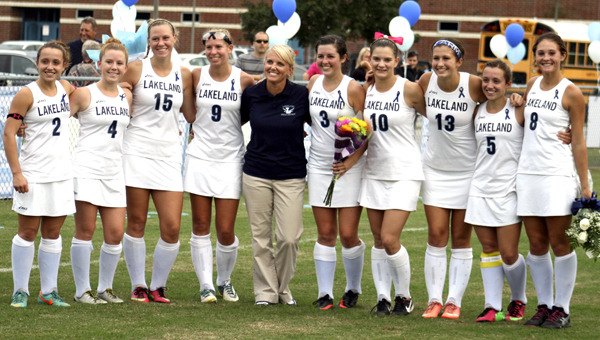 Wednesday night’s home game against Phoebus High School was a fitting reminder that this year’s field hockey team at Lakeland High School is indelibly shaped by its large and talented senior class.

Lady Cavaliers head coach Tara Worley does not allow more than nine goals to be scored in lopsided games, but this was just enough for the seniors to accomplish their goal on senior night.

Senior midfielder Kristen Vick said, “Our plan was for every senior — we have nine seniors — to score one goal.”

Lakeland cruised to a 9-0 win, and the plan was a success.

Having never played Phoebus before, Worley said coming into the game, “We didn’t know exactly what to expect, so we didn’t want to get ahead of ourselves.”

They found the net quickly, however, and though part of it was due to the Lady Phantoms being a weaker conference foe, the rest is due to Lakeland’s consistent play as of late.

“We’re doing a good job right now of playing our game, despite who our opponent is,” Worley said.

She said they are playing with a lot of speed and are demonstrating strong communication on the field.

“It’s a great time to be playing at the level they’re playing,” she said.

In Worley’s 15 years coaching varsity field hockey at Lakeland, this is the largest senior class she has ever had, eclipsing the group of seven from the 2010 state championship team.

She highlighted another reason the class of 2014 is special. “Of all the groups of seniors that I’ve ever had, even the large class I had in 2010, they committed to Lakeland field hockey when they were in elementary school and started playing together as a group back then,” she said.

Worley said they started with 12, so they lost a few along the way, “but these nine remained committed with one goal in mind.”

Five of them got the experience of winning a state title in 2010 as freshmen, but Worley said they agreed, “By their senior year, they wanted to get their own.”

They seem well on their way, improving to 13-0 on the season, concluding the regular season conference schedule with a 5-0 record.

Each of the last four years for Lakeland has been incredibly successful, and Alexis Albright offered a reason why this senior class has been so effective. In addition to the length of playing time together, she said, “We know how to work together,” and they also knew how to correct mistakes from last year.

Jamee Albright said the success is also a product of extra effort they put in outside of high school field hockey.

“I think that they’re an awesome group of girls,” Vick said. “We’ve not only become teammates, but we’ve become best friends.”

Parker, Lakeland’s all-time leading goal scorer, exhibited some of that best friend quality on Wednesday, routinely passing up scoring opportunities, instead looking to pass because she said, “I was just trying to find a senior that hasn’t scored yet.”

Of her fellow seniors, Jamee Albright said, “They’re like family. They always are there to give you words of encouragement, and I think we’re going to be friends, even when we go off to college.”

“I think it’d be weird playing with any other group of girls,” Parker said.

The Lady Cavaliers finish the season with a trio of games that could include their biggest challenge yet. They play Grafton High School tonight, First Colonial High School on Monday and Princess Anne High School on Oct. 25. All games will take place at the U.S. Field Hockey National Training Center.