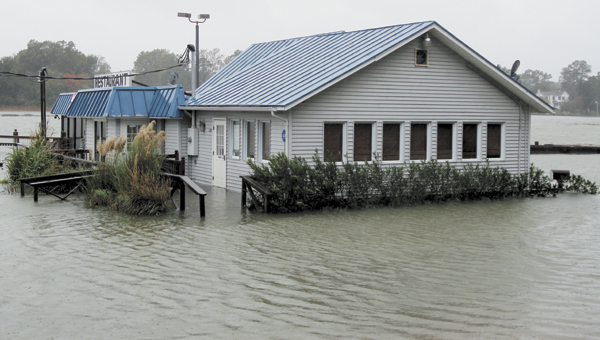 After being swamped several times in the past, Bennett’s Creek Restaurant and Marina came close to flooding during last week’s steady rain but was ultimately spared, its co-owner says.

Crossing Bennett’s Creek on Route 17, motorists may have thought the seafood restaurant had flooded yet again — it closed its doors for five months after Hurricane Sandy, reopening in May — but Cullen Wallace confirms it didn’t come through the door.

“It got all the way around the restaurant,” Wallace said. “Thursday was the worst day.

It didn’t actually get into the restaurant, but it blocked all walkways.”

As a result, he said, the business had been operating on shorter hours, but things are back to normal now.

“Other than that, we fared pretty good,” Wallace said. “We are up and running.”

Meanwhile, he reported strong trade since the weather has started to clear, with sunshine bringing out more people than normal.

“Everybody came out from being stuck inside because of the rain,” he said. “Our sales practically doubled.”

“I was praying and watching the water rise,” he said. “It’s in God’s hands. I would say it was around six inches from actually getting into the building. It was rather close.”

Given how often his business floods — in recent years, also during Hurricane Isabel in 2003 and a later nor’easter — it’s perhaps little surprise Wallace studies weather patterns.

The National Weather Service does not keep running rainfall totals for Suffolk, but 4.12 inches were recorded in Norfolk between Monday and Saturday last week after a bone-dry start to the month.