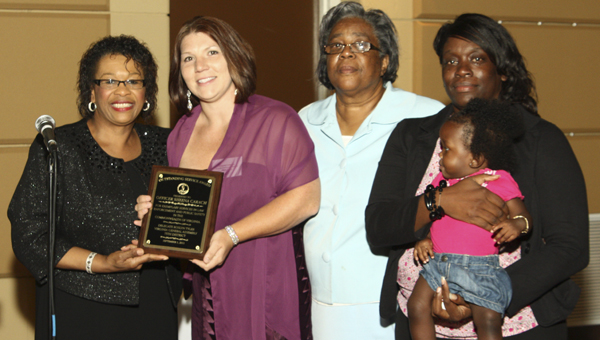 A former Waverly police officer who lives in the Windsor area recently was honored by Delegate Roslyn Tyler (D-75) at the delegate’s annual banquet.

Sheena Carach was honored for her efforts to save the life of 20-year-old Demetrius Taylor of Wakefield, who had an undiagnosed heart condition. Taylor had no pulse and was not breathing when Carach responded to a call to her family’s house in July.

“As soon as I saw her, I just knew she was gone,” Carach said in an interview Tuesday.

Carach started CPR and rescue breathing anyway. Taylor took two breaths while Carach kept up her efforts for about 30 minutes while waiting for an ambulance to arrive from another call.

“I made a decision I wasn’t going to give up on her,” Carach said, adding about being able to keep up CPR for 30 minutes: “I guess it was God and adrenaline and everything all at once.”

At the hospital, Taylor was kept alive for about five days before her family made the decision to let her go. The extra time meant the world to them, Carach said.

“They had five days they got to sit there with her,” she said. “You don’t always get to say goodbye.”

Carach said she became close with the family through the situation. She attended the funeral, and they attended Tyler’s awards banquet to see Carach receive the award.

“I have always had this dream that I wanted to help people,” Carach said. “I felt like (being a police officer) would be everything in one. I get to be a counselor; I get to be a teacher; I get to be a nurse. And then there’s the law enforcement side of it.”

Carach has some advice to others that she took out of the situation.